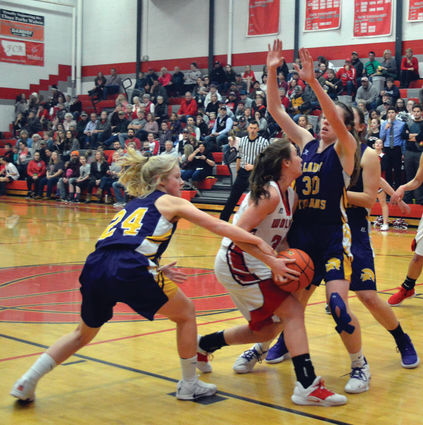 Kyle Olson fights through the double team in action last week against Whitehall.

Throughout her career with the Three Forks High School girls basketball team, senior Kyle Olson has excelled with numerous huge games for the Lady Wolves. Faced with a two-game losing streak, Olson once again shined Friday night for Three Forks with a monster game scoring 30 points in the 45-34 road victory over host Jefferson High School.

In their Thursday night matchup against Whitehall, Three Forks kept the game close and were tied 10-10 before a 18-2 run by the visiting Lady Trojans.

Head Coach Mike Sauvageau said his team had a lot of early opportunities to score in the game, but they missed a lot of shots and did not rebound well. He said Whitehall would switch to a zone defense and after that they really took it to them. 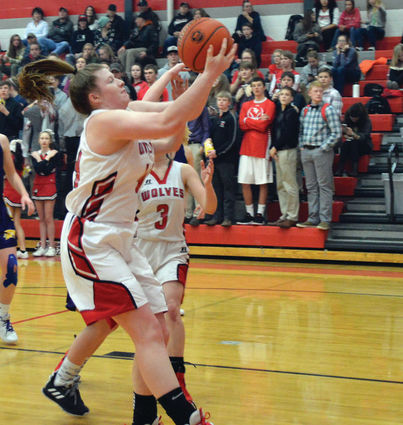 Breanna Bloch grabs the rebound for the Lady Wolves.

Olson once again led the team in scoring with a game high 24 points. Following the game, Trojans Head Coach Kelly Nieskens praised Olson calling her one of the best guards in all of Montana. Nieskens said he knew they could not stop Olson, but they hoped to slow her down while limiting the scoring by the other Lady Wolves.

Sauvageau discussed the importance of playing together as a team.

He said it is difficult to win when one player in a game is leading the team in scoring, rebounding and assists.

"But Whitehall took it to us tonight. They are a good basketball team," he said.

Bloch added five points for Three Forks, Howey had two, and Keaton Lynn and Erin Welter each added one point.

Three Forks will next play Friday at Manhattan and will host top ranked and undefeated Townsend Saturday. The Lady Wolves nearly upset the Bulldogs in their last matchup, falling 36-35 earlier this season.