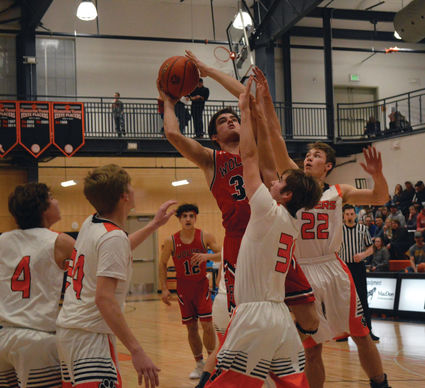 The Three Forks High School boys basketball team will wrap up their regular season this week with a road game Friday at Deer Lodge and a Saturday night senior night contest against Columbus.

The Wolves (12-4, 8-2 5B District) picked up two wins last week, the first a 72-56 road win Friday over Manhattan. They won their fifth consecutive game Saturday with a 59-33 home victory over Townsend.

Looking towards the Friday matchup against Deer Lodge, head coach Terry Hauser said it is always tougher to play on the road, especially the longer trips like the one Friday.

"It's even tougher when the team your facing is playing at a high level. They are 16-2 and ranked fifth in the state for a good reason. They were the first to knock off Big Fork this year and they hadn't lost for over a year," Hauser said. "So, it's exciting because we have an opportunity to play another top-tier team in the state and to come out with a win right before tournament season starts would be a huge confidence boost."

"These seniors mean the world to me, I love every single one of them and we have been through some really good times. We have handled some adversity together as well and that always makes a relationship have that much more trust," Hauser said. "My brother has coached most these kids since they were in 4th grade so to say they mean the world to me is an understatement. It's going to be a really sad day when they graduate but I truly believe this is a special group of boys that have turned into young men over the past few years. I know that there are great things in store for these guys this year and it's because the experiences and love we have had and built with each other over the last three years. Not only that I have faith that these seniors will all grow to be great workers, husbands and fathers in the future. It truly is a special group."

In their Friday game against Manhattan, Three Forks would build a 20-10 lead at the end of the first quarter and took a 31-20 lead into break before outscoring the Tigers by six in the third to take a 17-point lead into the final quarter. 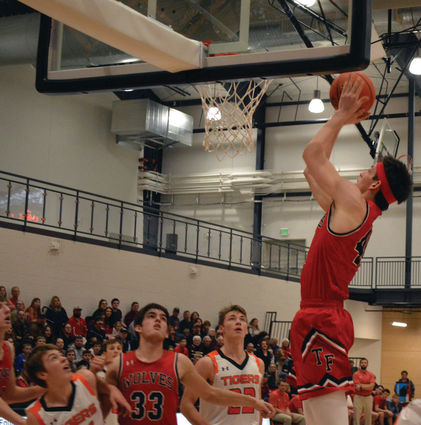 Corey Yecny puts up the shot after grabbing a rebound last Friday night against Manhattan.

Miller led the team with 19, Olson and Dustin Dalke added 13, Yecny had 11, Lynn and Long each finished with five, Dallas Cooper had four and Zach Pitcher added two points.

Hauser said he felt the team played good for two quarters but was lackadaisical for the other two.

He added they gave up too many three-point shots and tried to match them with three's and that is not the game they want to play. Hauser said they are dominant inside and teams are going to have to start double teaming them and that's when they can get the ball outside.

"Our energy was high for the most part and anytime you can get a rivalry win on the road it's good," Hauser said.

Lynn led the team with 16, Dalke had 14, Yecny finished with 12, Miller had eight, Olson added six, Copper finished with two and Conner Woodall added one point.