The Montana House of Representatives last week advanced legislation that would require a two-third vote majority for the Legislature to transfer funds out the state's fire suppression account.

The governor would still hold the authority to pull from the fund, as well.

Speaker of the House Greg Hertz, R-Polson, is carrying House Bill 276 and said on the House Floor during the bill's second hearing that it was proposed in response to the historic 2017 fire season that drained government funds.

"We were sitting here in 2017 with a winter much like today," Hertz said.

According to Montana Department of Natural Resources and Conservation, the state doled out an estimated $74.4 million in 2017 to pay for fires. Gov. Steve Bullock declared a state of emergency that summer.

The pricey fire season, in conjunction with worry over state revenue estimates, led Bullock to call a special legislative session. It resulted in major cuts to funding for government agencies like the Department of Health and Humans Services and the Department of Corrections.

Hertz said a two-thirds vote is needed for withdrawals from other trust funds, like the coal severance tax trust fund, and said it's reasonable to add it the requirement to the fire fund.

However, Rep. Zach Brown, D-Bozeman, spoke during the floor session to say that had this requirement would be in place before 2017, it wouldn't have made a difference.

"It wouldn't have changed the 2017 fire season or prevented this body from raiding the fire fund," Brown said.

The bill passed third reading 59-40 and will move to the Senate for debate.

The Montana House of Representatives last week passed a bill that would prohibit local governments from implementing gun ordinances.

About 50 volunteers for the Moms Demand Action group gathered in the Montana Capitol Monday to lobby against the bill, House Bill 325.

The national Moms Demand Action group aims to fight for stricter gun laws and was formed after the mass shooting at Sandy Hook Elementary School. Head of the Montana chapter, Kiely Lammers of Billings, said the bill is a a step backward.

"Our number one priority is always stopping dangerous bills. We don't want to dismantle gun safety bills that we already have in place," Lammers said.

The bill passed the House 57-42 on Thursday and will move on to the Senate.

In 2016, Missoula's City Council passed an ordinance that would require a background check for all gun sales in city limits. Attorney General Tim Fox is fighting the ordinance and is appealing several lower court decisions to the Montana Supreme Court.

Rep. Matt Regier, R-Columbia Falls, said in the bill's public hearing on Feb. 1 that the goal is to "minimize confusion."

"Without this bill, there will be a kaleidoscope of different gun laws that checkerboard our state," Regier said.

Lammers said her group will also be pushing lawmakers to consider "red flag" laws, which are used in other states to restrict gun ownership for people deemed a danger to themselves or others.

Lammer said she understands both sides of the argument.

"I get that people enjoy guns, that they want to have them around for protection. I understand all the reasons people want them," Lammers said. "I just want to be a proponent of helping people understand it's not an 'either or.' You can have both."

Montana lawmakers are trying to solve shortages of educators in rural communities in the state, and one proposal would add $500,000 per year to a teacher recruitment program.

Before the proposal -- House Bill 211 -- landed in appropriations committee, it was voted on by the House as an education bill. It passed 92-7. With an appropriation attached, the House passed the bill Saturday on a 84-9 vote. It will move to the Senate.

Rep. Llew Jones, R-Conrad, is carrying HB 211, which was endorsed by the House Appropriations Committee on Feb. 20. The Quality Educator Assistance Program first passed in 2007, but was defunded when the state experienced a budget crisis in 2017. This bill would restore that funding.

The program provides loan assistance payments for up to three years to teachers who choose to teach in rural school districts, with the payments increasing each year. A first-year teacher receives $3,000 and that's increased to $5,000 by year three. HB 211 would also make the assistance payments tax-exempt.

Emily Dean, communication specialist for the Montana School Boards Association, spoke in support of the bill during its public hearing in the appropriations committee. She said that Class C and B districts, the most rural in Montana, experienced 13 percent vacancy rate on the first day of school this year.

"The shortage of teachers in our rural schools is an issue of great consequence," Dean said.

Representatives from the Montana Rural Education Association and the Montana Federation of Public Employees also spoke in support of the bill. No one spoke in opposition.

Jones said this program is research-based and proven to help teacher recruitment and retention. He also said it narrowly targets areas in need.

"I believe it is a wise investment," Jones said.

Andrus supports House Bill 16, which would offer $15 million from the state's coal trust fund as a loan to develop low and moderate-income housing across the state. She said she, along with 19 other mayors in the National League of Cities, has looked at solutions to offer low-income housing.

"We look at how we can improve and evaluate regulations, we look at new programs and opportunity zones. But this is not enough," she said. "(House Bill 16) is another tool in our toolbox to solve our affordable housing problem."

Bozeman City Commissioner Terry Cunningham said only one percent of Bozeman's housing rentals are vacant, and the lack of home options is negatively impacting businesses.

"Local businesses would like to expand, but their ability to attract qualified employees is being hindered by housing affordability," he told the committee as one of 14 supporters of the bill.

The bill passed out of the House with a vote of 71-29. There, some lawmakers opposed the bill because of its use of coal trust funding. But Fern said housing developers will pay the money back with a 7 percent interest rate, and the Legislature, in part, is responsible for creating affordable housing. 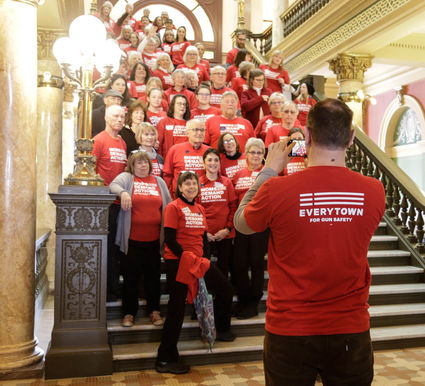 Volunteers for Moms Demand Action pose for a picture inside the Capitol on Feb. 18, 2019. Photo by Shaylee Ragar / UM Legislative News Service.

"Well, I think it's appropriate that the government is a partner in helping solve the problem," Fern said. "I think this is one of the situations where utilizing our great asset can start this ball rolling."

If the Legislature wants to use the coal trust fund, which currently holds about $1 billion, it would usually require a three-fourths vote in each body. But since the money is being paid back into it, only a simple majority is needed to pass the legislation.

The bill drew no opponents during the Senate Taxation Committee hearing.