or the second consecutive week the Three Forks High School volleyball team will be on the road with matches scheduled Thursday at Ennis and Saturday at Big Timber.

Head Coach Tracy Welter was extremely proud of the way the team played and while the team had very few errors overall, the errors did happen at crucial times.

“The loss in the first two sets could of and may have had a different result had we not made crucial mistakes at crucial times,” she said.

Macey Combs and McKenzie Feddes each had a team high 18 digs against the Lady Tigers. Kirsten Klompien led the team with 18 assists, four blocks and three aces, and Erin Welter had a team 10 kills. 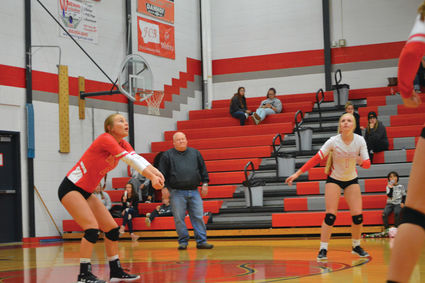 “The tourney on Saturday was a pretty rough one for us! We have been battling injuries and colds for what seems like all season. The most positive and important thing that happened for us is we got a lot of playing in. We practiced different rotations and positions with some of the girls,” Welter said.

In stats from the tournament, Feddes led the Lady Wolves with 28 digs, Klompien had 18 assists, Breanna Bloch had four blocks, Welter had 13 kills and Macie Jensen had four aces.

Looking towards the remaining six games of the regular season, Welter said the team needs to continue with consistency.

“We need to continue you to clean up our errors. If we can do this, we will be just fine,” she said.