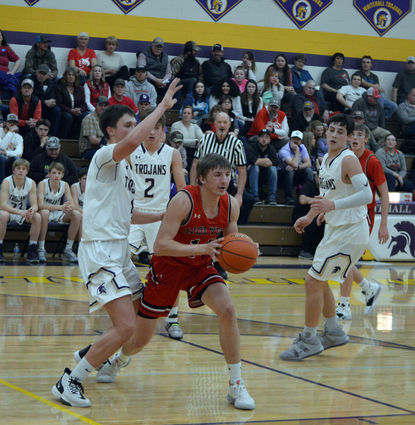 Dustin Dalke works inside earlier this season against Whitehall. Three Forks will next play Friday when they host Manhattan. Voice photo by Jack H. Smith

While they had not played a game in two-weeks, the Three Forks High School boys basketball team showed little rust offensively in last Fridays' 76-61 road win over Jefferson High School.

"I was happy with our energy. Our offense was great, and we are not struggling to score which is nice," said Head Coach Terry Hauser.

The Panthers were able to get back into the game outscoring Three Forks 22-17 in the second quarter to cut the lead to 41-32 at the half. The Wolves would have anothe...