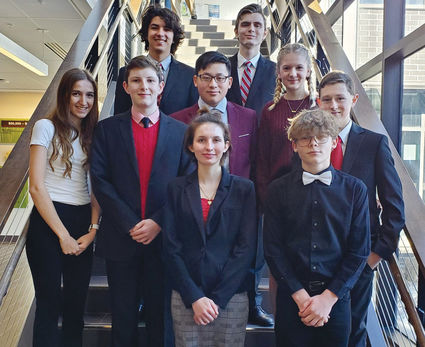 Competing at last week's event in Manhattan, the Wolves remained undefeated with the first-place finish in speech and also placed third in drama.

Head Coach Greg Overman said it was an unusual situation in Manhattan with Wolves finishing in the top three in Impromptu Speaking.

"Given that each team can only have a maximum of three competitors, to take the top three places in that event is a pretty impressive accomplishment. With Bailey Partain placing first, Ally Kamps, placing second, and Grace Donnelly placing third, that degree of competition amongst the three is really driving them to succeed," Overman said. "Obviously, Speech & Drama is competitive, and there can be a degree of competition amongst our own team members. These three young people are an example of that competition driving them to be successful, to push each other. With Bailey being a senior with four years of experience, Ally being a junior with three years of experience, Grace Donnelly is modeling herself after that experience and succeeding. Both Bailey and Ally have had successful careers in Speech & Drama, and because Grace has watched that success, she is now achieving it herself."

The squad also sent participants to Northwest College in Powell, Wyoming to compete against out-of-state Class 4A competition.

Overman said in the past they have sent their debaters to Carroll College for a meet, but since they did not host one this year, they decided to go to the Wyoming meet.

With the postseason close, Overman feels his team is getting ready for the challenge.

"As a team, the Speech team was dominant despite having several competitors in Wyoming. The divisional tournament is nearing, and the members of this team are truly becoming prepared for that moment," he said.