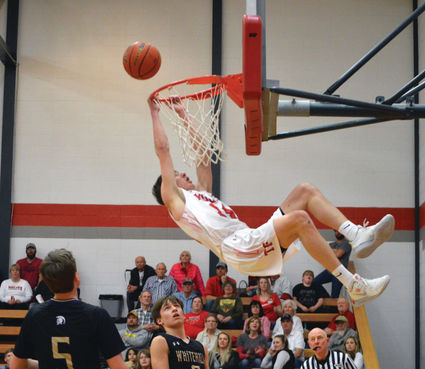 Dustin Dalke hangs on tight during the Wolves win over Whitehall.

Prior to last week's home conference games against Boulder and Whitehall, Three Forks High School boys basketball coach Terry Hauser used a majority of his practice time to focus on the defensive end of the court. The extra time in practice paid dividends for the Wolves (12-2, 8-0 5B) who used two dominant defensive performances to pick up a 68-42 win over the Panthers and a 63-39 victory against the Trojans.

Hauser said he apologized to his team that they had not worked on defense enough the past couple weeks and they probably spent three-quarters of their practice time last week on defen...