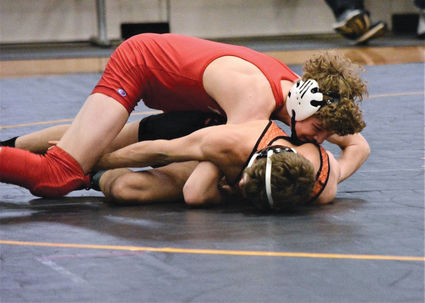 Dylan Kamps controls his opponent at the Divisional Tournament.

Freshmen Dylan Kamps and Levi Wagner both stamped their ticket to state with top-four finishes at last Saturday's Southern B/C Divisional Tournament in Cascade. Wagner finished in third place at 132 pounds and Kamps finished in fourth at 126 pounds.

After a bye in the opening round, Wagner won by fall in 31 seconds in the quarterfinals against Cael O'Dell of Broadwater. After losing in the semifinals to eventual champion Mike Wilkinson of Whitehall, Wagner won his final tw...