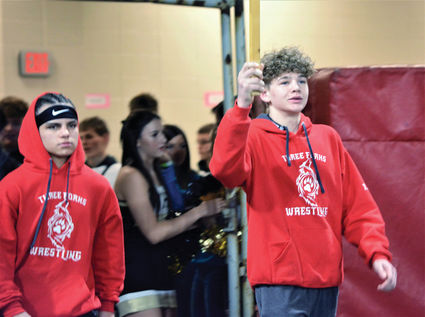 Levi Wagner and Dylan Kamps take part in the opening ceremonies at last week's State Wrestling Tournament in Billings. Both wrestlers picked up a win for the Wolves.

Freshmen Levi Wagner and Dylan Kamps both had wins by fall last Friday at the MetraPark Arena.

Wresting at 132 pounds, Wagner opened the tournament with a pin over Devin Nesbitt of Baker. He was defeated in the next two matches by eventual second-place Class B/C finisher Kyle Durden of Eureka and to Riley Richtmyer of Towsend.

After losing his first match to second-place finisher Roper Mycke of Conrad, Kamps bounced back with a p...