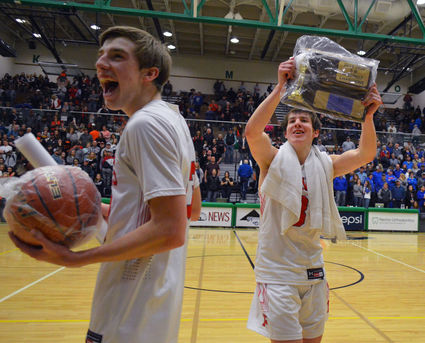 "It's kind of surreal right now. I expected to hold it up, but when Dustin (Dalke) when down it became a little more questionable, but we handled the adversity and the kids stepped up. Now we get Dustin back for Divisionals and the kids have some more confidence now," said Head Coach Terry Hauser.

Three Forks took a 16-10 lead at end of the first quarter thanks to 10 points from Hauser and six from Owen Long.

Hauser continued his strong play in the second quarter with nine more points helping the Wolves to a 30-25 lead. Long added through the first two quarters.

Coach Hauser said Micaiah knew he needed to score more with Dalke out and he has started to build confidence and getting to the hoop more.

"He's not settling. What a great weekend he had," Hauser said.

Three Forks would stretch the lead to 45-36 going into the fourth with hot shooting from the outside and continued strong player form Hauser. Zach Pitcher hit two three pointers, and Owen Long hit a three at the buzzer to up the lead to nine. Hauser had seven more in the quarter to up his total to 25.

Manhattan would cut the lead to 50-47 with three minutes left before the Wolves sealed the game at the free-throw line.

Pitcher said after losing the last two years this win really meant a lot to the team.

The top seed from 5B, Three Forks will next play March 5 at 9 a.m. at the Southern B Divisional Tournament against Colstrip, the third seed from the 3B District.

"It's Divisionals time baby, the Metra is one of the funnest places to play," Hauser said.