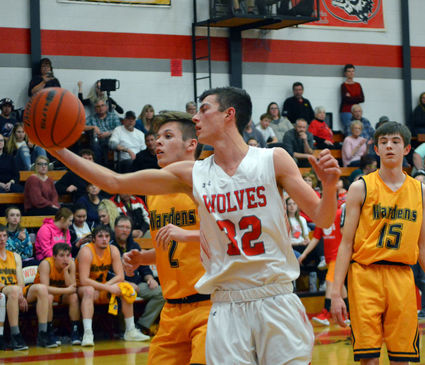 Coming of a week of adversity that included their first conference loss of the season and the injury of star senior Dustin Dalke, the Three Forks High School boys basketball team bounced back in triumphant fashion with two wins over ranked opponents. The Wolves (15-3, 9-1 5B) ended their regular season with a hard-fought 46-40 home win over Deer Lodge and 75-67 road win over Columbus that was sparked by a game for the ages by senior Micaiah Hauser who had a career-high 42 points.

Tied at six at the end of the first quarter Friday, Three Forks would take a 21-18 lead into the half. After briefly trailing in the third, the Wolves would respond regaining a three-point lead (43-40) going into the fourth. Sophomore Owen Long was huge in the fourth and scored seven consecutive points to help seal the win.

Head Coach Terry Hauser said it was huge for the team to get the win.

"It's really big for our confidence going forward. They are the seventh-ranked team in the state and number one in the west. It's just a huge win for us. To come together and play our butts off and get the victory is huge," he said.

Long led the team in scoring with 17, Hauser had 12, Zach Pitcher finished with nine, Austin Alley had seven and Mayson Shively added one point.

Hauser was impressed with how hard his team played.

"When you lose a guy like Dustin, everybody has to step up and everybody who played did. Everyone who had one or two minutes, they played hard, and they were disciplined. We are going to be more of an outside team with Dustin out, but Austin (Allen) and Zane (Hansen) did a great job hitting the glass on both ends. Their heart was on the line," he said. 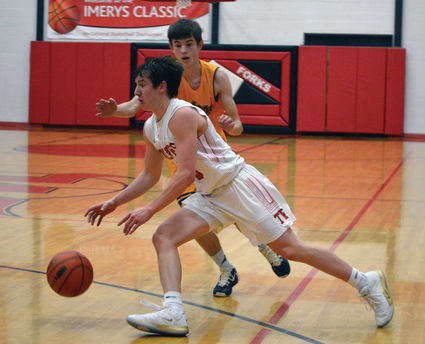 Trailing 24-20 at the end of the first quarter Saturday against Columbus, Three Forks stormed back led by Hauser to take a 36-33 halftime lead and outscored the Cougars 24-18 in the final quarter.

Hauser led the way with the game-high 42, Long added 16, Allen had nine, Pitcher finished with five, Trenton Nimmick and Hansen both had two, and Zach Butcher added one.

Three Forks will open the 5B District Tournament with a Friday semifinal matchup against the winner of fourth-seeded Townsend and fifth-seeded Big Timber. The game is scheduled for 3 p.m. at the Belgrade Events Center. The winner will move onto the championship game Saturday at 6 p.m.

"I have coached a lot of teams. The way this team gets along and cares for each other is unmatchable. We are a family," he said.