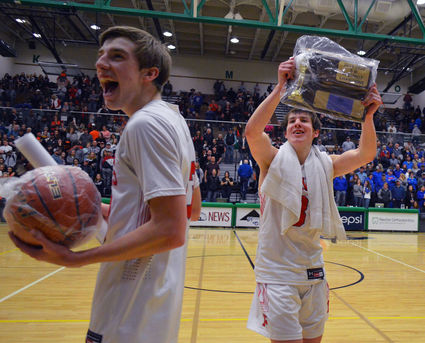 Above, Zach Pitcher and Micaiah Hauser celebrate after winning the 5B District Tournament Title. Voice photos by Melissa Jenkins

The Three Forks High School boys basketball defeated rival Manhattan last Saturday to capture the 5B District Tournament title. Led by an unbelievable 34-point performance from Micaiah Hauser, the Wolves (17-3) defeated the rival Tigers 55-51 at the Belgrade Events Center to claim the championship.

"It's kind of surreal right now. I expected to hold it (championship trophy) up, but when Dustin (Dalke) when down it became a little more questionable, but we handled the adversity and the kids stepped up. Now we get Dustin back for Divisionals and the kids have some more confidence now," said H...