The Three Forks High School girls basketball team has a motto they end each practice with --- every day and every way you get a little better. With the team opening the season Saturday, January 2 at home against Columbus, Head Coach Mike Sauvageau is hoping the team will continue to follow this mantra and steadily improve over the course of the season.

While the team was unable to attend any camps or play any summer games, Sauvageau was very pleased with the work his players put in since the team last played at the Southern B Divisional Tournament in February.

"I love what they did this summer. They spent a lot of time in the gym working on their individual games. We have to try and put it together as a team," he said.

Three Forks started practicing on December 7 and Sauvageau was pleased with what he saw early on but have lost a couple of anticipated starters due to injury. While the injuries were tough for the team, Sauvageau noted this has given other girls a chance to play a lot more. 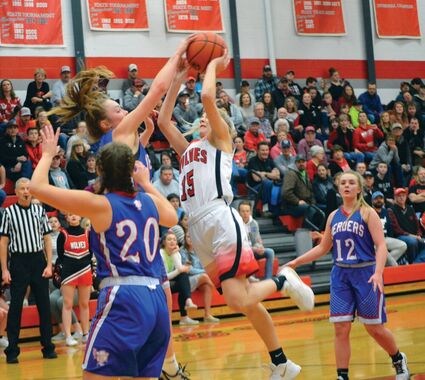 When the team takes to the floor against the Cougars, Sauvageau said Kinzee Howey will start at point guard and has a lot of experience. Also starting for the Wolves will be Ashlyn Swenson, Jayden Woodland, and Jasmyn Murphy. Sauvageau said the final starting spot should be Breanna Warren, Addi Pestel or freshman Fallon Page.

It will not be an easy opening game against Columbus who Sauvageau said is a mature squad that will return a lot of players, has some good shooters, and size.

"It's going to be an uphill battle and we are going to have to find a way to slow them down offensively," he said.

Looking towards the season, Sauvageau said his team has a tough schedule with two of the top five teams in the state in Big Timber and Whitehall but his team is hungry and ready to play.

"They like to work, and they are a great bunch of girls," he said.

Editor's Note: Look for more about the Lady Wolves, as well as the boys basketball, wrestling, and speech team in next week's Three Forks Voice.