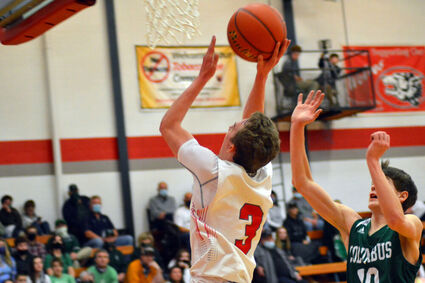 Jacob Buchignani takes it to the hole in action earlier this season against Columbus. Voice photo by Melissa Jenkins

It will be a jam-packed week of action for the Three Forks High School boys basketball team.

The Wolves (0-3, 0-2 5B) fell 46-41 Tuesday at home against Twin Bridges, will be on the road on January 14 at Butte Central, and will wrap up the week Friday with a home game against in-county rival Manhattan Christian.

In action last week, Three Forks fell on the road 63-51 to Manhattan Friday and lost 75-71 in double overtime Saturday to Townsend.

In his pre-game talk prior to the Townsend game, Head Coach Terry Hauser said he talked with his team about fighting for four quarters.

"We had fought hard for two halves first two games and we preached putting that effort into 4 quarters and it happened to be for five quarters with the two OTs, so I was dang proud of them," he said. "They continue to play hard and that's all that's the one thing they can control the rest will take time but I'm confident we will be a tough team to beat come tournament time."

Owen Long had a big game against Townsend finishing with 22 points.

Hauser said it was nice to see him shoot well and get himself going.

"He's played great I need to do a better job of putting him in more situations to score," he said.

Austin Allen also had a huge night with 21 points. Jacob Buchignani added 16, Walker Page and Devon Potts each had six, Collins Stone had three, and Ayden Warren finished with two.

Allen and Buchignani each finished with 16 against Manhattan. Long had 10, Warren had five, Stone had three, and Page finished with one.

Looking towards this weekend, Hauser has been happy with how hard his team has played so far this season, they just need to improve on our turnovers and half-court offense.

"Being more disciplined in crucial possessions we get stops when we need on defense but offensively it seems like every time, we need a solid possession we throw it to the other team for a layup. Easy fixes and it's going to be a fun year, but we are going to have to keep working hard because our schedule doesn't get easier," he said.