Sara Kopp is a student who placed first on Saturday for the first time this season. Early on in the season, when everything was still in the beginning stages, Sara said, "My goal isn't right now, it is the end of the season." Obviously that perspective ended up falling into place, primarily because of the work that Sara put in, the constant corrections she implemented into her performance, and her pure coachability. What's more, Sara competes in the event of "original oratory," which is the act of creating a persuasive speech and delivering it. Sara chose at the beginning of the season to write her speech about the difficulties facing police officers in today's society, obviously a sensitive subject, yet she still took on the challenge and it is paying off. Sara performs side-by-side with Molly Collins, who has won every other meet in "original oratory" this season, thus making Three Forks undefeated in that event this season. To have two students in the same event creating such high-level speeches, and performing so aggressively is truly rare for any team. 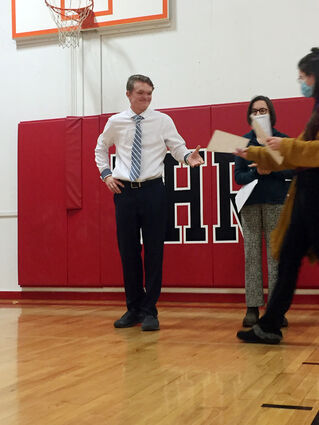 A team of freshman won their 2nd meet of the season. Zoe Pyfer, Lauren Welch, and Des Nienhuis continue to improve, put the work in, and work as a team in the event of "classical theater." These freshman realized early on in the season that they would have a chance to succeed if they put the work in, and since that realization they have come in to work day-after-day. This team competes side-by-side with the other classical team of Josh Williams and Falisha Dale who have won three meets this season, making Three Forks undefeated in that event as well. Thus, Three Forks has three events in Speech & Drama that they are undefeated in this season.

There are countless goals that this team had set for themselves that they have already achieved, and there are just as many unforeseen positives that have occurred that could have never been predicted. Yet, the majority of the goals that these kids hold for themselves are founded on the end of the season, and not the regular season. The divisional tournament this weekend and the state tournament the following weekend will be the true test of what this team is capable of.