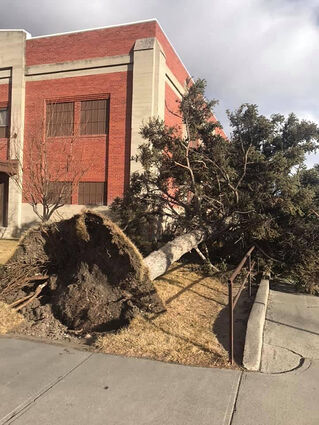 Pictured is an uprooted tree in front of the Three Forks Middle School. Photo courtesy of Tracy Welter.

What is being described as a once in ten-year wind event wreaked havoc across the Treasure State last week including multiple trees being uprooted and power outages in the Three Forks area.

According to Christian Cassell, Leader Meteorologist with the NWS in Great Falls, the high winds were a result of what is called an Atmospheric River Event which he described as a very powerful jet stream that extends from the Central Pacific to the Pacific Northwest.

Much like a hurricane, an Atmospheric River Event is measured by strength in one to five and Cassell said this was categorized as a five. He added a five is normally something you would see once a year, but in this case, it was a wind-event that you would only see every ten years.

Cassel said the event brought significant moisture to the Northwest but as the jet stream moved across Mountain ranges like the Cascades and Bitterroots, they ended up getting strong winds and dry weather, and the very powerful jet stream also extended lower in elevation then what they normally see.

Cassell reported winds gusts of 90 to 100 at 10,000 feet and in a lot of places those winds reached the surface at almost full strength with widespread wind gusts in the 70 to 80 mile per hour range and a high wind gust of 95 miles per hour reported at Judith Peak. January wind records were set in Helena, Great Falls, and Havre, and Bozeman at 63 miles per hour was just one mph below their January record of 64 set in 1972.

Cassell said it is quite normal to see damage from a wind event like this, but what made this one unique is that it pretty much covered the entire state.

Two of the very visible uprooted trees in Three Forks included one in front of Three Forks Middle School and another on First Avenue. Superintendent Jeff Elliott estimated the tree was between 80 to 100-years-old.

"It seemed like pretty much everybody experienced significant impacts," Cassell said.

NorthWestern Energy reported statewide damage and at one point on January 13 their online outage map was down as a result of the aftermath of the event. 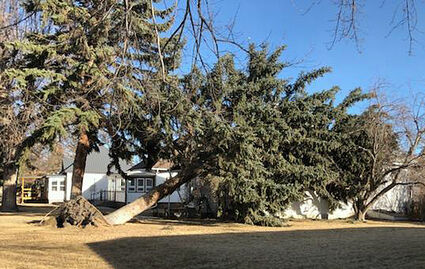 Pictured is damage from the storm at a residence on First Avenue. Photo courtesy of Pat Townsend