Before the start of last Friday's conference road matchup with Big Timber, Three Forks High School boys basketball coach Terry Hauser told his staff he saw a different swagger with his team before tip-off and they were going to win the game. Hauser was correct with assessment as the Wolves came out of the gates strong taking a 23-12 lead at the end of the first quarter on their way to their first victory of the season with the 63-57 win.

"It was amazing to see the kids finally click offensively. We have been struggling to score and that wasn't the case Friday night. We had so many great possessions, moved the ball, and played team ball. We have been working on 20-30 second possessions in practice and stressing shot selection and limiting turnovers and it paid off," Hauser said.

Three Forks was sparked by a monster night from junior Owen Long who finished with 35 points. Hauser said Owen has had three or four games of 18 plus points, but he had been wondering when he would "go off".

"He's such a great scorer and capable of having 30-point nights any given night. I told him before the game that it was time for him to show everyone how good he was and that I was confident that he was going to have a great night and I was right. He got to the rim and didn't settle for jump shots and because he was aggressive at the rim, and he shot 15 free throws," Hauser said.

Along with the praise of Long on offense, Hauser was prouder of his defensive effort and rebounding.

"I know he can score but what I really stay on him about being a great all-around player on both ends of the floor. He wants to play college basketball and to do that you have to be able to defend and he's been buying into that concept and that's going to take this team to the next level," he said.

In action Saturday, the Wolves showed they were a much different team during a rematch with county-rival and undefeated Manhattan Christian. After falling 66-30 in a Jan. 15 matchup in Three Forks, the Wolves came out strong leading at the end of the first quarter and trailing by just two at halftime, 20-18.

The Eagles were strong to start the second half and outscored 13-5 in the third quarter on their way to a 45-32 win.

Hauser was very proud of the effort against Christian, holding a team that averages over 70 points to a season-low 45 points.

Hauser said the team struggled to score and shot just above 20 percent, got destroyed in the rebounding battle and that cost them the game.

"It didn't help our offense having Owen (Long) in foul trouble he sat the last six minutes of the second quarter and the whole third quarter which is very unfortunate because he was on his way to another big scoring night and we might have had a better chance to win had he not been in foul trouble," he said.

Long led the team with 17 points, Allen and Buchignani each had five, Ayden Warren finished with three and Walker Page added two points.

During the two weekend games, Hauser was able to see his team smiling and looking confident for the first time in the 2021 season. 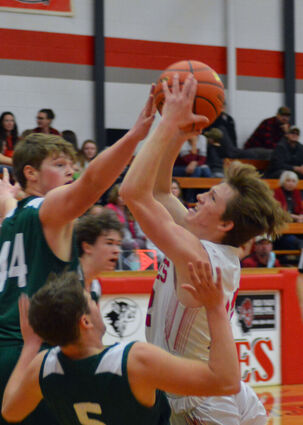 Owen Long goes up for a shot in home action earlier this season. Long had 35 points in a road game last week at Big Timber. Voice photo

"You could see how tense most of the inexperienced kids were in previous games and I thought all weekend they looked much more relaxed. It was a great weekend and so nice to see guys gain some confidence. Jacob (Buchignani) had a huge weekend, and you could just see him keep getting more and more confident as minutes ticked off the clock both nights. He had a great game last night considering he had what might be the best on-ball defender he will face all year guarding him full court all night harassing him, and he handled the pressure with great poise and I am confident he will keep improving," Hauser said. "We also played Friday night without Austin Allen pretty much the whole night because he too was in foul trouble and sat next to us coaches half the game. The biggest positive I took away from this weekend and will definitely address it this week at practice is that the whole time Austin was on the bench Friday night fouled out he stayed positive never once complained just kept leading from the bench cheering and coaching his team up encouraging them on every possession and that is what leaders do and we have been lacking leadership thus far. It was a great weekend for us, and I am so proud of our guys for sticking together and not giving up and I can't wait for a full week of practice go to work and keep improving."

Three Forks will host Jefferson Friday and will be on the road Saturday at Whitehall.