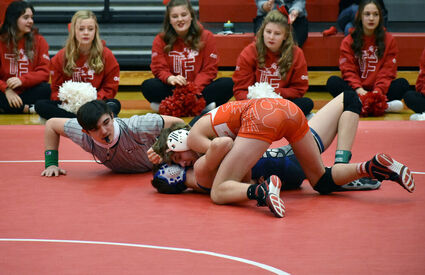 Dylan Kamps works for the pin in a dual against Fairfield. Photo by Jenn Wagner.

The Three Forks High School wrestling team has their sights set on the Divisional Tournament scheduled for later this month in Cut Bank.

Third-year Head Coach Nye Howey believes his team has been doing good at recent dual events but have not always been at full strength as they prepare for the postseason.

"Our number one focus right now is the Divisional Tournament. Our kids are young, but they have the experience in wrestling. We just have to set our minds right for the tournament," he said.

In action last week, the Wolves traveled to Manhattan to face off against the rival Tigers and hosted Townsend and Fairfield on Saturday. 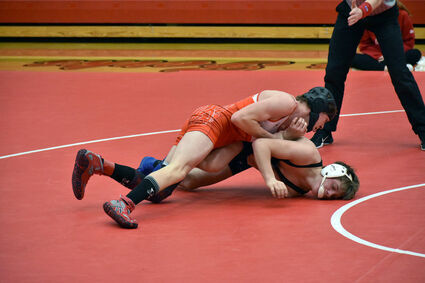 On Saturday, Jace Ashley earned a pin victory over Thomas Buresh of Townsend at the 1:48 mark at 113 pounds. Chase Kirkland won 9-3 over Sean Ward of Fairfield at 126 pounds, and Hungerford won 18-11 over Aiden Kopenhaver of Fairfield at 138 pounds.

Levi Wagner (138) won by technical fall at 5:03 over Kopenhaver and picked up a pin at the 4:11 mark over McCoy Banner of Fairfield.

Kamps pinned Beau Pierce of Fairfield in a quick 30 seconds and also pinned Conner Lamb of Townsend at 2:25 at 145 pounds.