With the win, the fourth-seeded Wolves advance to the semifinals and a Thursday matchup at top-seeded Manhattan. Tip-off is scheduled for 6 p.m.

Following the game, Head Coach Terry Hauser said his team might have been a little nervous, was not getting rebounds, and could not get out in transition.

"We come out flat like that we will be in trouble,' he said.

The Wolves opened up last week's action Friday, February 19, with a hard-fought 66-62 loss at Jefferson.

Head Coach Terry Hauser said despite the loss, his team turned the switch in Boulder.

"I know we lost, but I felt we came together as a family. We are playing selfless basketball at the right time," he said. 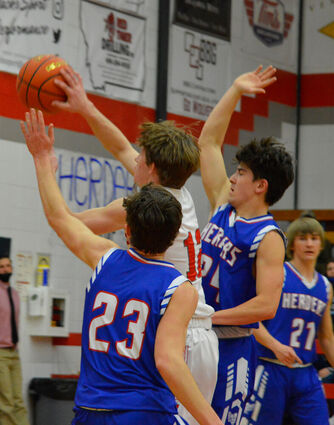 Three Forks ended their regular season Saturday with a 72-57 home win over Whitehall. Tied 12-12 at the end of the first, the Wolves would outscore Whitehall 27-8 in the second quarter to take a 39-20 halftime lead.

Hauser said the team came out a little flat, which can happen after a tough game the night before, and he had to talk to them about effort.

"There is never an excuse not to give effort. That is something we talk about a lot. Control the things you can control, and number one is effort. There is never a reason not to play hard. I'm really proud of the way we responded and played in the second quarter," he said.

Long led the team with 26, Allen had 18, Buchignani was also in double figures with 10, and Shively added 8.