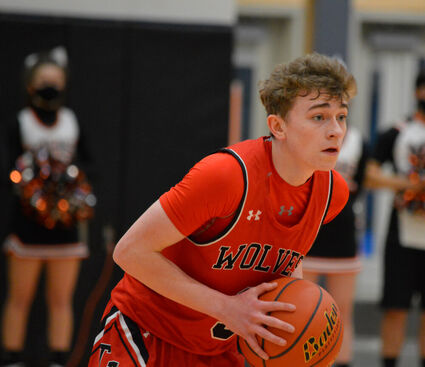 Jacob Buchignani had a great tournament for the Wolves. Voice photo by Melissa Jenkins.

Just moments after the Three Forks High School boys basketball teams 59-35 5B District semifinal loss February 25 at Manhattan, Head Coach Terry Hauser said he was unsure how his team would bounce back. It turned out the Wolves would face adversity like a champion in their elimination game on February 26 and defeat Boulder 75-56. The following day, they would defeat Big Timber 50-47 to finish third at the 5B Tournament and advance to the Southern B Divisional Tournament for the fourth straight season.

"We talked about trusting the process all year long, and here we are going to Divisionals. The kids kept buying in and buying in. Last night (at Boulder) was so impressive to bounce back like that. It was probably our best game all year," Hauser said.

The third seed from 5B, Three Forks, will open the Divisional Tournament Wednesday, March 3 at the Billings Metra against the top-seed from 4B Huntley Project.

"I'm so thrilled to be going to Billings and giving these guys the experience. We are going to see what we are made of. It is going to be fun to see if we can go shock the world a little bit," he said.

Following the game, Hauser said his team might have been a little nervous, was not getting rebounds, and could not get out in transition.

Host Manhattan stormed out of the gates early, taking a 12-0 lead before Three Forks scored their first points of the game on a Buchignani free throw with 3:35 left in the first quarter. The Tigers extended their lead to 23-5 at the end of the first quarter and led 36-10 at halftime.

Hauser said his team came out and played kind of soft and scared and feared the moment instead of being fearless.

Three Forks was led in scoring by Shane Williams with 10 points. Long and Allen each added eight points. Buchignani and Devon Potts each had three points, Van Vleet added two, and Walker Page finished with one point.

Three Forks bounced back strong outscoring the host Panthers 21-10 on their way to the 75-56 victory. Long had a huge night with a game-high 25 points. Buchignani added 19, and Allen had 15. 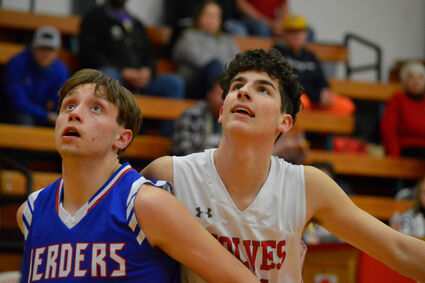 It was tightly contested opening quarter, with Three Forks taking a 13-12 lead at the end into the second. The second quarter was another back-and-forth affair. With the game tied at 22-22, Buchignani would put the Wolves up 25-22 at halftime when he banked in a three-pointer at the buzzer.

The third quarter would belong to Three Forks, who outscored the visiting Herders 17-10 to take a 42-32 lead into the final quarter.

Big Timber would make things interesting in the fourth when the cut they cut the lead to 50-47 10 seconds left in the game. The Herders would miss a three-pointer with time expiring to give the Wolves the win a trip to Billings.

It was a big night for Buchignani, who led the Wolves with 17 points.

Allen was also in double figures with 11, and Long added nine. Williams and Page each added four, Shively finished with three, and Collin Stone ended his night with one point.