After abundant snowfall in many of Montana's river basins during February, streamflow forecasts issued by the USDA Natural Resources Conservation Service (NRCS) on March 1 indicate an increased likelihood of near to slightly above average spring and summer stream flows across the state.

February snowfall totals were impressive at mountain and valley locations across Montana, some locations west of the Divide added up to sixteen inches of water to the snowpack during the month. "The Bitterroot, Upper Clark Fork, Lower Clark Fork, southern Flathead, Gallatin and Shields River basins had monthly snow totals which were record-setting, or near record-setting at some mountain locations," said Lucas Zukiewicz, NRCS water supply specialist. "While the other river basins didn't set new records for February snowfall, monthly totals were well above normal for almost all river basins in the state." This was enough for all river basins to experience an increase in snowpack percentages by March 1, though the increases weren't as dramatic in northwestern river basins along the Canadian border.

"It is impressive how much of the March 1 snowpack is made up of only February snow. Heavy snowfall in the Upper Clark Fork and Bitterroot over the month coupled with below normal snowpack on February 1 means that 30 to 40 percent of the snowpack is from February alone," said Zukiewicz. Some areas benefitted even more, like in the Shields River basin in south-central Montana. "Due to the extremely low snowpack entering February, monthly snowfall accounts for almost 70% of the March 1 total snowpack in area," continued Zukiewicz.

The NRCS issued its first official streamflow forecasts for the April 1 through July 31 period this month. The increase in snowpack to near or above normal in many locations, combined with the boost to water year precipitation totals from October precipitation, resulted in forecasts that generally indicate near to slightly above average stream flows for many rivers and streams across the state.

"There are, however, some regions that could benefit from some spring precipitation," said Zukiewicz. The Beaverhead and Ruby Rivers in southwestern Montana currently have forecasts which are well below average for the coming spring runoff season. "Spring storms in this region can make up a lot of ground quickly, so the story is far from over." However, if those storms fail to deliver, the current snowpack won't go far. "It's like leaving for a cross country road trip with 2/3 of a tank of gas. It's incredibly unlikely you'll get to where you want to be before the tank is empty." 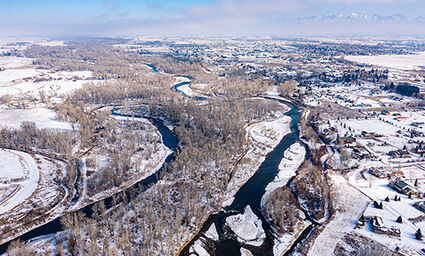 On March 1, one to two months remain until the snowpack peaks before runoff occurs. Peak snowpack at lower elevations in the state typically occurs in late March to early April, while mid to high elevations peak during April or early May. "As such, April 1 snowpack totals will give us a clearer picture of what to expect with regards to our peak snowpack and how full the mountain snowpack "reservoir" is before it starts draining," said Zukiewicz.

A full report of conditions for March 1 can be found in the monthly Water Supply Outlook Report available on the Montana Snow Survey website on Friday, March 5. In addition, real-time snow survey data can be found at https://www.nrcs.usda.gov/wps/portal/nrcs/mt/snow/.