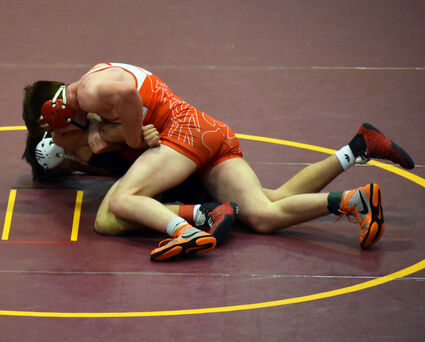 It was a program-defining moment last weekend for the Three Forks High School wrestling team. Competing with six wrestlers, the Wolves brought home a team trophy with a third-place finish in Class B at the State Tournament in Shelby.

The phenomenal weekend of results included Brayden Linville at 103 pounds and Coy Cohenour at 160, both capping off an unbeaten season with State Championships. Cole Rogers at 103 pounds and Levi Wagner at 138 points both finished in fourth place. In the Class B Standings, Three Forks finished only behind state champion Glasgow and Huntley Project.

Head Coach Nye Howey praised his team for not only their performance at the tournament but throughout the season. He was also impressed they were back working in the wrestling room Monday, less than 48 hours after the state tournament.

"State was on Saturday, and we already have kids getting ready for next year and a tournament this week in Utah. These kids eat, sleep, and drink wrestling, and it shows," he said.

Linville was dominant to open the tournament, winning his first match by fall against Seth Kornick of Columbus in just 18 seconds. After defeating teammate Cole Rogers 6-0 in the quarterfinals, he won a 9-4 decision over Logan Van Dyke. He won the state title with a 7-1 win over Leo Anderson of Boulder.

Linville said it was not just him that walked away with a state title, it was the atmosphere of the Three Forks wrestling program.

"There are now words to the amount of thanks I want to give my teammates and my coaches," he said.

Following the state tournament, Linville said he was surprised the team did not finish higher than 10th a the divisional tournament in February, but that was due to not having as high numbers as some of the other teams. He said once they qualified for State with six and were able to finish third, it showed the quality of wrestling in Three Forks.

Looking towards the future, Linville already has the goal of another state title in 2022 and hopes this year's team's success will encourage younger kids to get involved with the program.

Cohenour won his first two matches by fall, opening with a pin at 2:47 against Ian Willoughby of Colstrip and a quarterfinal pin at 5:20 over Miguel Perez of Fairfield. After winning by injury default over Daimien Nesbitt of Glasgow, Cohenour won the state title with a 7-5 win over Wylee Lindeen of Huntley Project.

While many state champions may have taken some time to relax, just two days after his state title, Cohenour was already back in the wrestling room.

The senior standout was already assessing his final match and admitted he gave up a few points that he should not have, and happy to have won the title after what he described as a long year.

"I honestly felt exhausted. A lot of work had gone into it," he said.

In his first year with the program, Cohenour has also witnessed a lot of growth.

"It is amazing to see how much the program has gotten better in the year I've been here," he said.

It would also not surprise Cohenour to visit the team in the coming years and see a lot more hardware from the state tournament.

Along with a tournament this weekend in Utah, Cohenour also is preparing for the National High School Finals this summer in Fargo, a tournament where he has some high goals.

"I want to win a national title," he said.

Rogers had a great tournament at 103 pounds for the Wolves winning four matches, including two by fall. 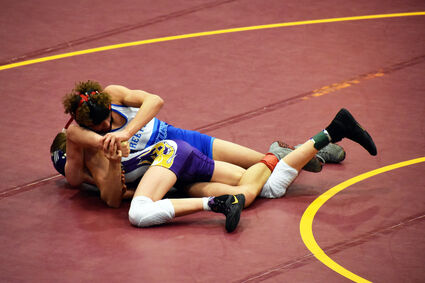 Chase Kirkland won his opening match at 126 pounds with a pin over Ty Borge of Colstrip at 6:17.

Wrestling at 138 pounds, Wagner opened with a pin over Reinhard Bold of Fort Benton at 3:08 and a 9-4 quarterfinal win over Riley Richtmyer of Broadwater. Wagner also won in the consolation semifinals with a pin over Weston Timberman at 1:56.

Dylan Kamps picked up a win at 145 pounds with a 6-3 victory over Hayden Anderson of Huntley Project.

Along with the success on the mat, Howey is also more then happy with how his team carries themselves outside of the wrestling room.

"We want them to do the best they can on the mat, but they are just as good of kids off the mat," Howey said.