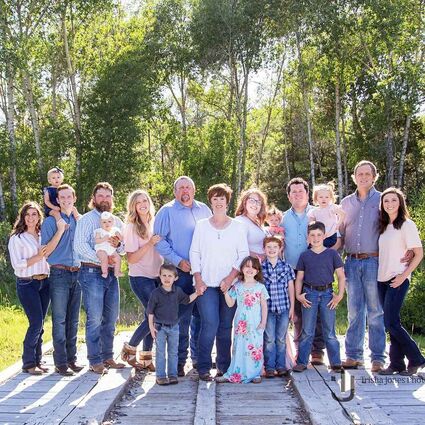 He from Billings, she from Whitehall, Lance and Gayla Sieler wanted to settle in Montana.  They were renting a mobile home in Churchill for eight years, looking for "the right place".

"I was driving around and saw a promising For Sale sign on Price Road, but 320 acres was more than we wanted," Lance says.

His boss at Darigold came up with a solution - boss would buy half, the Sielers' would buy the other half.  They finished building their house right before Christmas and planned to spend Christmas day with family in Whitehall, but nature had other plans.

"There was a full-on blizzard," Gayla recalls. "We started driving down the road but met five-foot drifts.  We turned around, put a roast in the oven and I made one of those boxed Jello cheesecakes."

After opening presents and eating dinner they saw a guy riding up on a horse.

"He was going down the road making sure everyone was okay.  We invited him in for cheesecake.  That type of neighborliness is one of the things we love about Three Forks!"

Over the years more people have built out their way and the Sielers' added horse corrals, 4H pens and fences and have sold some of their acreage.

"We used to know everyone out here, but it's grown so much," says Gayla.

As secretary at the high school, she loves getting to know more families and their children.  The Sielers' enjoy horseback riding and 4wheeling, hunting, camping and just driving around in the mountains.

Lance often says "I don't need to go travel much when I have so much right here in my backyard in Montana to discover."