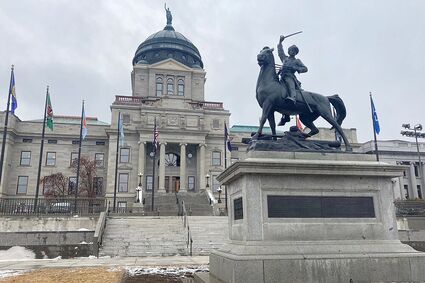 The 67th Montana Legislature has adjourned, capping four months of work in an unprecedented hybrid session as the state and the nation struggle to end the COVID-19 pandemic.

With more than 1,300 bills introduced, 500 passed and 350 signed into law, the 2021 session saw conservatives advance a flood of legislation to the governor's desk, fueled by the presence of a Republican in the state's highest office for the first time in 16 years. Much of that legislation dealt with fallout from the pandemic, even as the Legislature combated the virus in its halls -- with Democratic resistance often coming up short against the majority Republican lawmakers in both chambers.

Republicans succeeded in passing some of their long sought-after agenda items, like sweeping election reforms, increased gun access and restrictions to abortion services while also limiting the rights of transgender youth and bolstering religious freedoms. Those pieces of legislation stoked the flames of a controversial session that also featured heated debates on issues like the state budget, tax reform and implementing a recreational marijuana program.

In a speech before lawmakers in the House of Representatives, Republican House Majority Leader Sue Vinton, R-Billings praised the work of her caucus to pass a "conservative" budget, protect second amendment rights and more.

"It has been a successful session, and one Montanans can be proud of," Vinton said.

Democratic Senate Minority Jill Cohenour, D-East Helena, told Senate lawmakers she was pleased with how closely the Legislature's bill to implement recreational marijuana stuck to the original ballot initiative and praised work done to distribute billions in federal pandemic relief money, but expressed frustration with "missed opportunities" from a session she said was often bitter in tone.

"Despite the good work done on these pieces, I'm disappointed we often chose the politics of division over what's best for Montanans," Cohenour said.

As the doors close on the 2021 Legislature, here's a recap of some of the biggest issues:

The Legislature completed their only constitutionally mandated task -- passing a balanced budget -- on the final day of their work, April 29. House Bill 2 appropriates $12.5 billion in state and federal funds for the next two years, paying for state programs in health, education, law and justice and more.

Rep. Llew Jones, R-Conrad, sponsored the bill, and suggested it was "beautiful" when he introduced it on the House floor.

"The statistics on this bill are pretty good," Jones said. "Beauty is in the eye of the beholder, but this is a good, solid budget."

Democrats in the House, however, unanimously opposed HB 2, slamming it for "policy language" inserted into the bill, like one amendment that informs the Department of Health and Human Services of the Legislature's intent to end continuous eligibility for Medicaid expansion, a program that allows some Medicaid users to stay enrolled for longer periods of time without reapplying.

"It's hard to imagine a bill that's more harmful to the kiddies than this one, where we'd be asking unelected bureaucrats to be doing what we soundly rejected in our Legislature on a bipartisan basis," said Rep. Ed Stafman, D-Bozeman.

The budget is 3.6% larger than the one passed in 2019, but 1% smaller than Gianforte's proposed budget. However, one Democrat in the Senate criticized Republican amendments to the bill to fund expected legal battles over controversial legislation passed this session. Sen. Ellie Boldman, D-Missoula, denounced a $100,000 appropriation in the bill to defend a legal challenge to bills ending same-day voter registration and boosting voter ID requirements and a $285,000 appropriation to fund a special interim committee on "judicial transparency and accountability," created to investigate the judicial branch for accusations of bias and wrongdoing.

"Elections have consequences, and I'm just afraid for the taxpayers of Montana," Boldman said, though she ultimately voted for the bill.

Lawmakers also passed a bill with plans to distribute about $2 billion in federal COVID-19 relief. House Bill 632 cleared the Legislature on bipartisan votes from each chamber, and is awaiting a signature from the governor. It creates a series of "advisory commissions" comprised of lawmakers and representatives from the governor's office to consider grant applications for the relief money, with millions of dollars available for sewer and water improvements, broadband expansion, health projects, public schools, housing assistance and more. The bulk of the money can be spent through 2024, and bill sponsor Rep. Frank Garner, R-Kalispell, said the injection of funds will help Montana "build bridges to the future."

The Legislature passed a bill with sweeping revisions to Ballot Initiative 190, which Montana voters passed to legalize recreational marijuana last November. House Bill 701 changes where marijuana tax revenues are distributed, how many plants individuals can grow for personal use, and how counties can go about opting in or out of the market.

The bill would tax recreational marijuana at 20% and maintain medical marijuana's 4% tax rate with the tax revenue going to conservation reduced compared to I-190. The ballot initiative originally promised nearly 50% for conservation efforts, but in HB 701, that amount is decreased to 32%, divided among wildlife habitat conservation, state parks, trails and the nongame wildlife account. The majority of the remaining revenue would fill the general fund, the state's primary "checking account."

The bill gives counties that did not vote in favor of legalization the option to hold a vote to opt-out of the marketplace -- though medical dispensaries already doing business in the county would be "grandfathered" in if that county decides to reject recreational marijuana.

"What we have in front of us is a dramatically better product compared to the initiative," bill sponsor Rep. Mike Hopkins, R-Missoula, told lawmakers in the House. "Without this bill, you have I-190 as law in the state of Montana."

The bill cleared the House on a bipartisan, 67-32 vote, with Democrats joining moderate Republicans to pass the bill. The Senate did much of the work on the bill after the House was forced to advance three separate, incomplete plans for recreational marijuana against a tight deadline in early April. But, the resulting "compromise" bill left many right-wing Republicans displeased, citing the addition of a 3% optional local sales tax on marijuana to the bill and a general lack of restrictions on edibles.

Tax cuts and credits dominated the revenue picture at the 2021 Montana Legislature, with measures to slash income tax rates and bolster exemptions for the business equipment passing late in the session. Gianforte promised broad revisions to state tax policy early in the session, though several measures took months to solidify amid discussions about how to make the cuts without eliminating key state programs.

Sen. Greg Hertz, R-Polson, sponsored two major income tax reform bills, both of which are awaiting the governor's signature. Senate Bill 159 seeks to cut the top income tax rate from 6.9% to 6.75% and cleared the Legislature mostly along party lines. Senate Bill 399 promises more dramatic reforms, however, aiming to bring Montana's state income tax filing structure in line with the federal government's. By 2024, SB 399 proposes simplifying Montana's six current income tax brackets into two: a higher bracket taxed at 6.5% for those making more than $20,500, and a lower bracket taxed at 4.7%.

Attempts by Democrats to pass bills cutting taxes for middle class families or introduce a local option sales tax all stalled in committee, and members of the caucus have expressed concern the newly-passed tax breaks will only impact the wealthy and large corporations. Republicans argue the bills will incentivize job growth and keep more money in Montanans' pockets.

Austin Amestoy is a reporter with the UM Legislative News Service, a partnership of the University of Montana School of Journalism, the Montana Broadcasters Association, the Montana Newspaper Association and the Greater Montana Foundation. He can be reached at [email protected]