A freshman at Three Forks High School, Rogers finished in sixth place at April’s UWW Cadet, U15 & Future Nationals tournament in Wisconsin Dells, WI. After losing his first match to the eventual champion, Rogers battled his way back to finish in sixth place in the 24-man bracket.

Rogers said it felt really good to know that all of his years of hard work are paying off.

He was joined at the national tournament by fellow high school teammates Dylan Kamps, Levi Wagner, and Chase Kirkland. Rogers feels the effort they have been putting in will benefit them a lot. 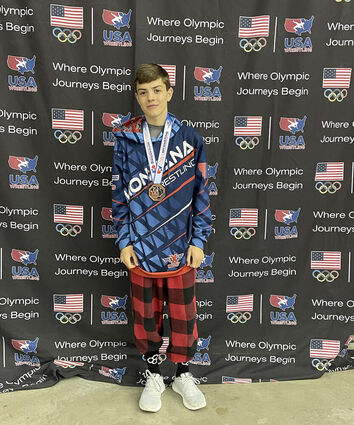 “We are putting in the most work, more than a lot of teams, and it will pay off in the long run. As a team, we have all improved so much this year, and even more just since the high school season ended. We will continue to get better through the summer. We will just go practice, our team, just to help each other improve,” he said.

The wrestling room in Three Forks will continue to stay busy in preparation for Western Regionals in Utah next week, another big tournament in June in Utah, and the National Championship in Fargo.

“This summer, my goal is to be a Fargo finalist. Fargo is what we have been training for all year,” he said.

Looking to the future, Rogers said his goal for next year’s high school is season is to personally win a state title, and to help the Wolves win a team state title.

“I took fourth place at state, and as a team, we took third place. We want better,” he said.