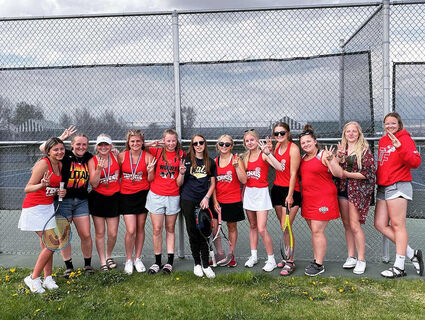 For the first time since the program started in 2018, the Three Forks High School tennis team has qualified players for the state tournament.

The senior doubles team Katie Hayder and Kinzee Howey finished in third place at last week's Divisional Tournament in Belgrade to qualify for the Class B State Tournament May 20 to 22 in Missoula. As a team, the Wolves finished in an impressive third place.

"It was an incredible season, and a lot of hard work, determination, and teamwork went into these wins. They didn't give up, and they fought for every point," said Head Coach Janna Lauver. "I am proud of all of the athletes I have coached this year and incredibly proud of our Divisional team we took to Belgrade, and I am really looking forward to taking Kinzee and Katie to state for their first time and look forward to State wins for them."

Hayder and Howey qualified for state with a 6-2, 6-2 win over Lone Peak's Vera Grabbow and Charlie Sue Dreisbach. The duo went an impressive 3-1 at the tournament.

Along with the strong play from the senior duo, there was plenty more great tennis from the rising Three Forks program.

Lauver said Alex Pierce played her best matches of the season against Jefferson and Broadwater, improving her net game and serves all season. Pierce had five points for the team at the tournament. 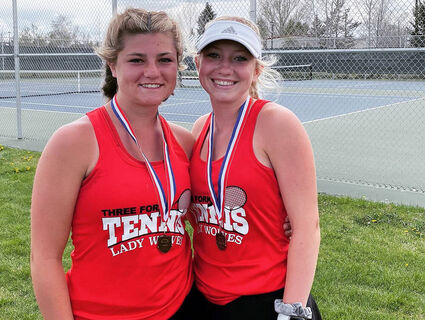 Lauver said Lauren Stone fought through a tough bracket and dug deep for a 2-2 record on day one and grabbed four points for the team.

Macie Jensen went 3-2, falling in the third-place match to Rita Buffa of Jefferson.

"Her grit and determination were key to her wins and contributing six points for her team," Lauver said.

Senor Chaylee Wester had a two-hour long match again Lone Peak at the tournament and also had to play her teammate Stone. Lauver said Wester finished out an incredibly strong season with the most wins and comeback matches.

The doubles team of Alicia Deriana and Ruby Warden advanced to the quarterfinals of their first Divisional Tournament. After defeating the Hartman/Berndt team from Red Lodge to advance to the quarterfinals, they were eliminated by Grabow and Dreisbach.