Cheering for an amazing cause: Three Forks well represented at East-West Shrine Game 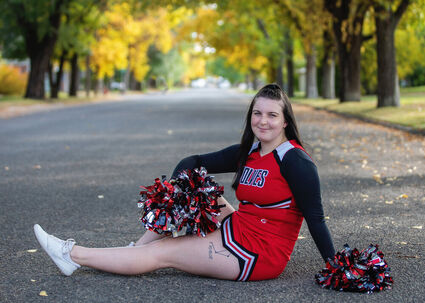 Each year the Montana East-West Shrine Game in June highlights some of the best football and cheerleaders throughout the state, at the same time raising money for the Shriners Children's Hospital in Spokane.

Three Forks High School was well represented in 2021, with senior cheerleaders Micaela Hegar, Emma Lamb, and Ravyn Lewis all taking part in the 74th annual game that took place June 19 in Billings, with the West picking up a 21-12 victory.

Lamb and Lewis had not heard of the game before being contacted about participating by TFHS Cheer Coach McKenzie Woodland, but along with Hegar, they were excited about the opportunity.

Hegar was not only elated to be able to cheer but felt gratitude for being selected.

"It was such an honor to be chosen to help kids get their medical needs and not having to worry about the cost," she said.

Lamb readily admits it was a lot of hard work battling the heat and exhaustion but at the same time said it was well worth it to be part of the fundraiser.

"We were able to help them get the money they needed for the care they deserve, so to me, it was the very memorable and honorable thing we did," Lamb said.

Lewis was able to hear the stories of children Lexi Emineth and Grant Heaton, making the experience worthwhile.

"I had the drive to be the best that I could be for not only these two but so many others. These two kids made me realize that there's more to just cheering one more time for my high school career, it was about those two and so many kids who needed help to the treatment they needed and deserved," she said.

Even though it was only a four-day experience, Lamb felt the squad came together in unison.

"We were all different, but we were able to collaborate and get along with each other really well," she said.

Having her teammates was also strongly important to Lamb.

"If I didn't have those two girls, I probably would not have interacted with as many people as I did. All the girls at the Shrine game were so nice, and I was able to feel comfortable to know two of my best friends were there to support me," she said. "I don't plan on cheering in college, so this was very memorable to me, especially for it being such a big event for a big cause."

Lewis felt cheering again did bring sadness and was bittersweet, but she knew she was not doing it on her own.

"I had two of the best people I've had the pleasure of knowing and cheering with doing it with me. I was excited, saddened, happy, so many emotions flew through me. And the night of the game, I couldn't keep it together. I cried and thanked Julie And Faith Shepherd, Logan Wearly, Latisha Demarais, and John Vermulm for making my last game the best one yet. My heart broke that night, but I was happy I got to cheer one last time and did it doing something that helped others, she said.

Hegar was also elated to be with her teammates one more time.

"Being able to cheer with the people that I've cheered with for four years was amazing. We got to not only keep our memories together but to make new ones still being together after graduating. We were not sure we were going to see each other again," Hegar said.

As far as the game, Lamb felt seeing her parents Rick and Valerie in the stands brought back many memories.

"They are so supportive of me. My mom is from Butte, and she's going to cheer with the Butte crowd who was on the West with us, and I tell you what, they know how to cheer," Lamb said.

Coped with hot weather, Lewis said they had to learn in four days what would take one season or even longer depending on the circumstances, but it was worth it. 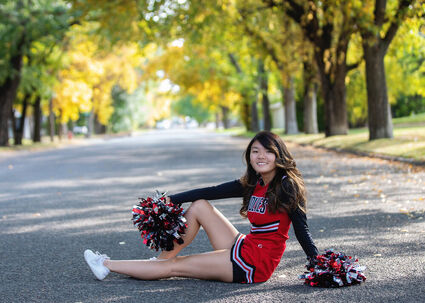 "It wasn't about the other girls or me there or cheering one more time; it was about the kids we were doing it for. The hospitals raise so much money in one night for so many kids that need treatment. In 1947 when the first shrine game was held, no one knew that there would be 74 more years of this. 74 years of raising money for kids who can't do the things we can. Sure, it was tiring and hot and a long process, but it was for a good cause. One that I will never regret doing no matter how hard it was, because in the end, as my coaches said, it was for the kids, and it will always be for the kids," she said.

Along with making new friends, Hegar said the kids involved with the Shriner's Hospital meant everything to the three Wolves cheerleaders.

"If you have a chance to check out the hospital and see what this game raised for the kids, it is amazing. It was an experience I was so grateful to be a part of," she said.

Lamb felt meeting a young boy who was helped by the Shriner's Hospital at a practice gave her extra motivation.

"He was such a nice little kid, and that made me work so much harder because I was able to get to know him a little more and getting to see what he was struggling with," she said.