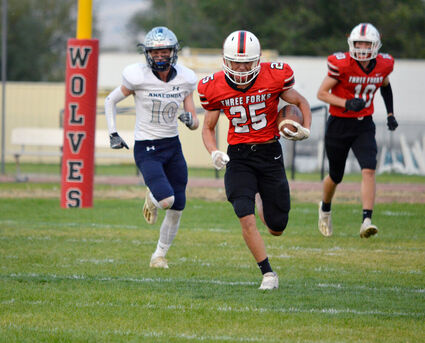 Three Forks sophomore Colten Hayder takes it 95 yards for a touchdown on the Wolves opening play on offense in Friday's 33-7 win over Anaconda. Voice photo by Melissa Jenkins

After an Anaconda punt forced them deep in their own territory, the Three Forks High School football team quickly set the tone for the game on their opening possession last Friday. Sophomore Colten Hayder busted free from the Copperhead defense, and his 95-yard touchdown put the Wolves on the board early in their 33-7 victory. With the win, the Wolves moved ended their non-conference schedule with a 3-1 record.

The Wolves were dominant on both sides of the ball and forced five Anaconda turnovers, including a critical 45-yard Walker Page pick-six with 2 minutes remaining in the half to push the lead to 14-0.

Three Forks was also plagued by turnovers in the victory.

Head Coach Connor Sullivan said both the offense and defense played tremendously, but the team must clean up all the little stuff like ball security and penalties.

"I'm proud of both sides. I thought the o-line played awesome, and so did the d-line and secondary," Sullivan said. 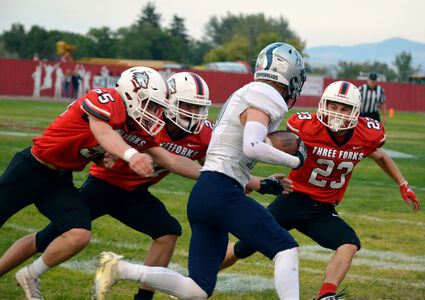 In his second start at quarterback, sophomore Tallyn McCauley finished his night with three touchdown passes, the first a 4-yard strike to Austin Allen with 21 seconds left in the first half to push the lead to 20-0.

McCauley would also connect with Dylan Kamps for a five-yard touchdown late in the third and a 12-yard pass to Reid Woodward on the first play of the fourth quarter to up the lead to 33-0.

Sullivan said it was good to see the sophomore find some success.

"The more he plays, the more experience he gets, and he's going to get better," he said.

Allen had a fumble recovery for Three Forks, and Kamps and Shane Williams each had interceptions.

The Wolves will open Southern B conference play Friday night on the road against high-powered Townsend.

"We need a great week of practice. It is a tough conference, every week matters, and we need to have the right mindset and the right focus to compete week in and week out," Sullivan said.