By From the Headwaters Heritage History 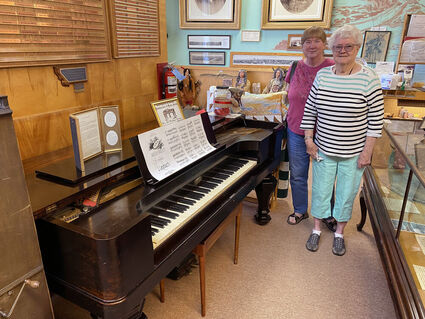 Lorna McCormick (front) and Teri Haney are pictured with the "Fannie Campbell Piano".

"Charisma, charm, beauty. It was said that when Fannie walked into a room it was as though a light had been turned on. People responded to this most popular and marvelous personality; everyone would come to life.

Fannie Campbell was born November 4, 1846, to Major James Blackwood Campbell and Sarah Kain Campbell. In the little village of Chicago, brown-eyed Fannie, her dark ringlets bouncing, would skip down the narrow paths with Anna, who was two years older.

The Campbell family moved to Missouri where Fannie and Anna attended the "Seminary of the Sacred Heart" at St. Charles. They stayed there until 1865, when they joined their family who had arrived in Gallatin City in 1863. While making their journey up the Missouri, their steamer sank at DeSoto. They were obliged to wait a week for another boat. Later, this boat got on a sand bar, and while men were searching for the channel, the Indians captured one man and two others were shot. Major Campbell and Frank Dunbar rode from Gallatin City to 200 miles below Fort Benton to meet them.

In 1866 Fannie's piano was brought by steamer to Fort Benton."

Fannie took her music seriously. She was proud of her piano playing, and even her obituary noted the pleasure it had given neighbors in those years of home entertainment. 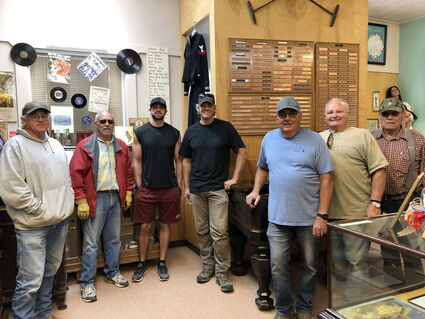 The piano here in the Headwaters Heritage Museum was returned 2500 miles from Missouri back to its home in the Three Forks area. The piano was made in New York by George Steck and sold by M.H. Saxton in St. Louis, Missouri. The piano had stayed with Fannie until the time of her passing. It then went to various family members including her nephew Herbert Dunbar, great-niece Thelma Dunbar, great-nephew Byron Dunbar, great-great niece Lorna Dunbar McCormick, and finally great-great-great niece Teri McCormick Haney. The piano was returned from Columbia, Missouri to Three Forks, Montana on September 16, 2021, by Teri and John Haney. The Museum is honored to have the piano returned to its home in Montana once again! It is believed to be the oldest piano in the Gallatin Valley.

The Museum would like to thank all the people involved in getting the piano into its position in the museum. Those involved were Matt Bugland, Kyle Dennehy, Wendall Ewan, Dale Kober, Mike Lane, Jerry and Cheryl Lehr, Eric Raube, Gene Townsend, Larry Wilcox, Teri and John Haney, and Mary Miller.