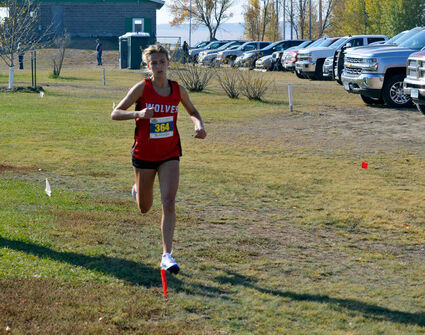 The Three Forks boys had four runners finish in the top ten and came out on top with 38 points, 19 points better than second-place Jefferson with 57.

Woodland continued her impressive season for the Wolves finishing the girls’ race in third with a time of 20:31. Other times in the varsity race were Isabella Fink (22:18), Bella Jones (22:21), Devynn Judd (23:09), Grace Kluin (23:33), and Rylee Dell (25:57). Head Coach Tara Forsberg said the girls’ team had good race and a few girls stepped up when one of their top runners had to cut her race shut due to a minor energy.

In the boys’ junior varsity race, Three Forks had two finishes in the top ten, with Rhett Violett placing third with a time of 20:46 and Trace Hay finishing fifth at 20:54. Others competing in the race were Noah Hegar (23:29), Lucas Roberts (23:46), Nicholas Howard, Sam Ramsey, and Asher Lehr.

Three Forks will wrap up the season Saturday at the state meet in Missoula.

“We are looking forward to state and both teams are hoping for hardware. With our strong season and the athletes training smart, we have high hopes for them,” Forsberg said.