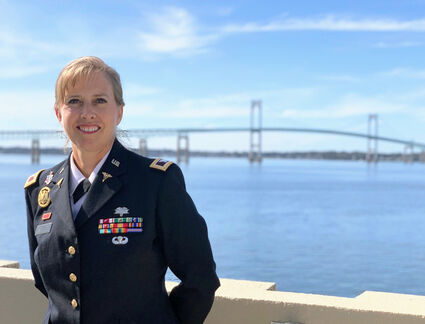 COL Tracy Schmitt of Three Forks was selected to attend the prestigious U.S. Naval War College in Newport, Rhode Island from November 2020-November 2021. COL Schmitt is an Army Reservist with duty at Ft. Douglas in Salt Lake City Utah as the 807th Medical Command Deployment Support (MCDS) Command Veterinarian. She was one of 50 of our nation's 200,000 Army reservists to be selected to attend in-residence war college. War college, also known as senior service college, is the Department of Defense's highest level of officer professional military education. The Naval War College has students from all services (Army, Navy, Air Force, Marines, Coast Guard) and our national security civilian counterparts. Additionally, the Naval War College hosts 50 international students and their families. The Naval War College is a prestigious program as our nation's first war college whose alumni have ranked among our nation's finest leaders for over a century. Its comprehensive and rigorous curriculum prepares future leaders for advanced command and staff responsibilities, high-level policy and succeeding in a joint and interagency environment. They focus on creating agile leaders while honing their critical thinking ability. COL Schmitt graduated with honors as a superior graduate while earning a Masters in National Security and Strategic Studies from the Naval War College. She will endeavor to use her strategy focused critical thinking skills in her division level job as Command Veterinarian before moving to a joint or interagency role in the coming years.

COL Schmitt was supported in this endeavor by her husband Marvin Schmitt, and their three children, Colton, Cassandra and Catherine of Three Forks, MT, parents Claude and Beverly Hoff of Windthorst, TX and many other family members and friends. COL Schmitt is a 1994 graduate of Windthorst High School, 1998 graduate of Texas A&M University, and 2001 graduate of Texas A&M College of Veterinary Medicine. She has served on active duty for 8 years and in the army reserves for the past 12 years. Her current residence is Three Forks.