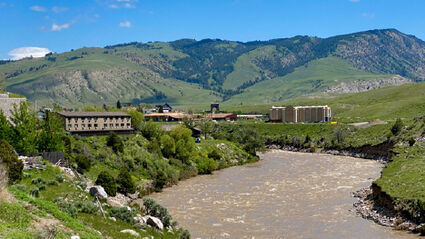 The phone for Park Hotel Yellowstone in Gardiner has been ringing around the clock with guests canceling summer reservations after historic flooding led to the closure of Yellowstone National Park this week.

"I'm getting hundreds of emails and calls daily that I'm trying to keep up with," said Tami McDonald, the hotel's owner. "I've been up 20 hours a day trying to respond to everyone and trying to figure out what to do and get ahold of the insurance companies who won't get back to us."

McDonald is one of many business owners in Gardiner and nearby gateway communities to Yellowstone who are grappling with the loss of tourism for the foreseeable future after flooding damaged multiple roads between the park's north entrance near Gardiner, Mammoth Hot Springs, Lamar Valley and Cooke City.

Many sections of road in those areas are wiped out and will require "substantial time and effort to reconstruct" and will not likely open this season, according to updates from the National Park Service.

Without access to the northern part of the park, many guests are canceling summer reservations that the town of Gardiner relies on.

"It's really major because the summer is when everyone makes their living," McDonald said.

McDonald said she has spent the past two days responding to hundreds of calls and emails from guests wanting to cancel reservations, and she is still unsure if her losses and those of other businesses will be covered by insurance.

Kiana Linares, an employee at Absaroka Lodge in Gardiner, said she has also been fielding countless calls from guests canceling summer reservations.

"Pretty much everyone has been canceling until October," Linares said. "There's really nothing else to do about it. I'm sure some people are going to start leaving because there's going to be no work here."

The COVID-19 pandemic, which forced many businesses to close, hit hard for many residents of Gardiner and other gateway communities for Yellowstone National Park. McDonald said the flooding poses an even greater challenge than the pandemic because the closures happened so suddenly, after food trucks and inventory had been delivered for the summer.

"We spent all this time getting the reservations together, getting all of our help, getting their housing. All the trucks came, the restaurants were all geared up, everyone spent all this money on inventory. It's actually unfathomable," McDonald said. "I think we're so shocked and overwhelmed that you feel kind of lifeless."

McDonald said she plans to keep Park Hotel Yellowstone open and is trying to stay positive, but at the same time, she needs business. She said she has been telling guests that Gardiner is beautiful on its own for a quick overnight trip to see the Heritage Museum, visit the hot spring or get a photo with the rock barge.

In a Facebook post, the Gardiner Chamber of Commerce asked visitors with upcoming plans to be patient and wait to cancel plans scheduled more than 30 days out, if possible.

MacNeil Lyons, owner of Yellowstone Insight guiding company, said he woke up in shock at 3 a.m., on Monday when he learned of the closures and the need to cancel tours and inform guests.

"If you think about the phrase 'treading water' or feeling like you're in a flood event, it all attributes to the feeling of where we are as a small business owner at a dead-end road," Lyons said.

Lyons said he has been trying to figure out how he can help the community respond to the flooding and how he can move forward with his business. Right now, he is waiting on more correspondence from park officials. But without roads leading into the northern part of the park, Lyons said there aren't many options to continue business.

As a way to potentially help small businesses, Lyons asked that guests with reservations in the coming months inquire about travelers' insurance as a way to cover their expenses for the trip, or contact the hotel or company to ask if their payment could be used as a credit in the future. That way, Lyons said, there is also a possibility that small business owners like himself are not left refunding every penny.

"I hope people realize the gravity of the situation for people that are in the towns of Gardiner and in Cooke City and Silver Gate at the northeast corner," Lyons said. "It's not just about a major flood. It's the long-term effects."

Schalene Darr, owner of Montana Goods and Grinds, formerly known as Yellowstone Grill, said she's heard about some restaurants and hotels in Gardiner that decided to close for at least the season.

"If nobody can get through the north entrance, they come down here and then they turn around because there's nowhere else to go, literally," Darr said. "Unless we can create something in Gardiner, Montana, for people to come and do besides Yellowstone National Park, we're in trouble."

Darr said she is trying to pivot her business to meet community needs. She said the business had recently shifted from a full-service restaurant to offering more to-go food options, smoothies and ice cream.

"It's going to be interesting to see how we can make that fit for our community, and something that our community needs," Darr said. "It's been hard to really process and try to decide how to proceed at this point, but I feel like we'll probably try to stay open in some capacity."

Montana Goods and Grinds is currently closed because the water is unsafe to serve the public due to damage to water pipes in the area caused by the flooding, but Darr plans to reopen soon.

Darr and others said that living in an isolated area near a national park that is heavily dependent on seasonal tourism comes with challenges, but she noted that the community pulls together in times of need.