Harmful algae blooms (HAB) are present on Hebgen Reservoir in the northeast portion, in the Grayling Arm area, of the reservoir. Routine monitoring and field testing in the Rainbow Point area of Hebgen Reservoir has detected the presence of an algal toxin, anatoxin-a, that poses a risk to people, pets, and livestock.

Lewis and Clark Caverns officials who oversee the Harrison Lake fishing site reported last week that the lake may have recently experience a toxic algae bloom. Algae Blooms have also been reported on the Gallatin River for the fifth straight year.

Ingestion or prolonged contact with the algal bloom may result in illness, with signs such as muscle twitching, staggering, convulsions, paralysis and death. Importantly, children and pets are more likely to ingest HAB infested waters because they spend most of their time wading in the shallow waters where algae can accumulate, and they have less control over how much water they ingest. Animals and livestock that drink large amounts of contaminated water, and pets that collect scum on their fur and then ingest it by licking, are at high risk of toxin exposure. Toxin exposure can occur in humans from recreational activities where water might be ingested such as swimming, wind surfing, jet skiing, and water skiing.

Health experts recommend people not swim or take part in activities likely to result in exposure to the toxin in areas where the algal bloom is present. Additionally, pets and livestock should be prevented from entering the water in that area.

HABs are caused by blue-green algae that are native to Montana's freshwater lakes and reservoirs. 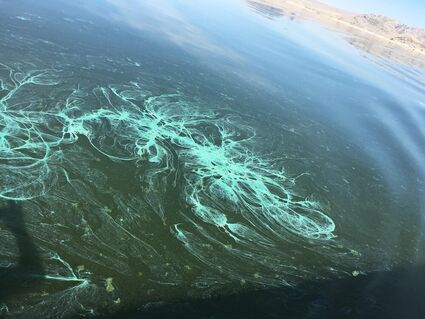 Not all varieties of blue-green algae are harmful, but some can produce dangerous toxins. Blue-green algal blooms often look like pea soup, grass clippings or green latex paint. The algae areusually suspended in the water or appear as floating mats.

Suspect a HAB? When in doubt, stay out. Do not drink, swallow, or swim in water that shows signs of a HAB and be sure to keep kids, pets, and livestock out too. If you suspect a HAB-related illness in a person or animal call Poison Control 1-800-222-1222 and seek medical attention.