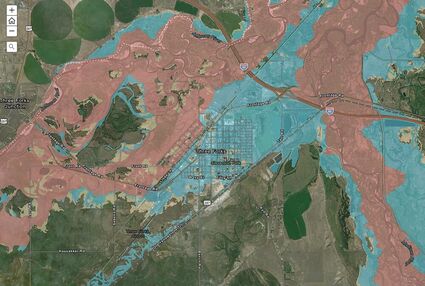 Pictured is the new FEMA floodplain map for Three Forks.

At the September 27 Council meeting, the City of Three Forks is conducting a public hearing and decision on a Resolution of Intent to create the Jefferson River Flood Mitigation Special Improvement and Maintenance District.

In January, the City of Three Forks submitted applications to FEMA (Federal Emergency Management Agency) to obtain funding for a flood mitigation project to reduce flooding risk from the Jefferson River. According to City officials, the proposed mitigation is a grass-lined channel and culvert crossing improvement project that will intercept floodwaters west of Three Forks and divert them back to the Jefferson River before reaching the city with a proposed cost of $5.5 million. Once the project is complete, 1,000 structures would receive some reprieve from the effects of flooding and eliminate the requirement of flood insurance for many. The project would also offer benefits in the form of lessened building restriction codes in the current flood area and protection from wildfires and droughts.

After submitting grant applications to the Building Resilient Infrastructure and Communities (BRIC) and Flood Mitigation Assistance (FMA) programs, the city received notification in August that they were selected for further review for the FMA grant.

City Treasurer and Floodplain Administrator Kelly Smith said although the grant should not be considered final, it is promising news for the City of Three Forks, adding if FEMA does not identify any issues in their review, the city can expect an award of $4,152,375 in federal funds. The grant would fund 75 percent of the project's total cost, and the city would need to provide the remaining 25 percent, or approximately 1.4 million plus additional project costs that may bring the city amount to 3 million.

The city plans to create a Special Improvement District (SID) to fund the project's costs and maintain the diversion channel post-construction.

To create the SID, a physical area where landowners are assessed an additional assessment to fund improvements that benefit the district, the council must pass a resolution of intent to notify landowners. If there is an insufficient amount of protests to cancel the project after 30 days, the governing body may pass a final resolution to create the district.

FEMA is currently in the process of updating floodplain mapping. Smith said if a flood mitigation project is not constructed, the draft maps, which would be officially adopted for regulatory use in the near future, show almost the entire city limits of Three Forks falling within the 100-year floodplain. She added a large part of the west side of town would also fall within the floodway (which is a "no build zone"), something that has not occurred before.

An Assessment Memo created for the SID states the boundary for the district was formed by including all the parcels within city limits that would benefit from the flood mitigation project through the removal or reduction of the Jefferson River floodplain.

"Previous analysis has shown the flood mitigation project can almost completely remove the city from the Jefferson River floodplain, although some areas will still remain within the Madison River floodplain. Therefore, the SID boundary generally coincides with the boundary of the city limits with the exception of the Ridgeview subdivision area to the southeast, which is not within the draft floodplain area, and part of the city limits to the southwest, which does not benefit from the Jefferson River flood mitigation project," (airport runway) states the memo.

To create the resolution of intent, the city must establish a boundary and establish a well-defined assessment method to assess landowners in the district.

The City of Three Forks has analyzed and computed two assessment methods for creating the Jefferson River Flood Mitigation SID. The two assessments assume the city obtains a 20-year loan through the DNRC State Revolving Fund (SRF) program. The loan is assumed to be $3 million, including the City of Three Forks' $1.4 million cost share of construction, $1.6 million for additional project costs required to move forward with the project, at an interest rate of 2.5%. $3 million is a maximum amount the project would need, but City Officials believe it will be less with in-kind work and money that has been set aside for this project.

1A would divide the total loan payments by the number of parcels in the SID to calculate the assessment fee per parcel. There are currently 991 parcels in the SID boundary, excluding the City of Three Forks and right-of-way properties. A total estimated loan payment of $3,846,000 would equal an assessment of $3,880.93 per parcel or $194.05 per year.

Method 2 would assess parcels based on the total value of the property, which is the sum of the land and building values. With an average property value of approximately $225,000, Method 2 assumes all properties less than or equal to $225,000 would be assessed $150 a year or $3,000 over 20 years.

For example, the highest assessed property using this method is the Sacajawea Hotel, with a total assessment of $26,000 or approximately $1,300 per year.

The memo states that while there is no "perfect" solution in developing assessment methodologies for the SID, the flood mitigation project will ultimately benefit the entire community of Three Forks.

"The goal of the SID assessment is to provide the most fair and equitable approach to the largest extent possible."

Property in the SID would also include an annual maintenance fee of around $50 per parcel. Maintenance will be required on the channel for mowing and weed control, and the fee will remain in place after the loan is paid.

Smith and City Clerk Crystal Turner encouraged Three Forks residents to weigh in on the proposed assessments and attend the hearing on September 27. Both said residents could stop by City Hall or visit http://www.threeforksmontana.us to get more information and see how the mitigation would protect the city.

During the September 13 meeting, Council President Gene Townsend said he was unsure that either tax assessment would be fair for everyone in Three Forks. He said the council should try to determine a method that was "equitable to the largest majority," adding that "there's always going to be some big winners and big losers." 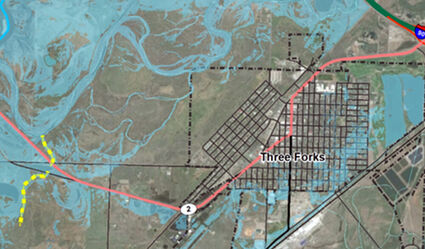 Pictured above is the Floodplain Map after a proposed channel Construction.

"I think we want to make it as fair and equitable as possible, but I don't think it's possible to make it where everybody is absolutely happy," Townsend said. "I think what we need to look at is the benefit it's [the Flood Mitigation] going to do to Three Forks."

The September 27 Council meeting is scheduled to begin at 6 p.m.