Wolves football back on the road Friday at Big Timber 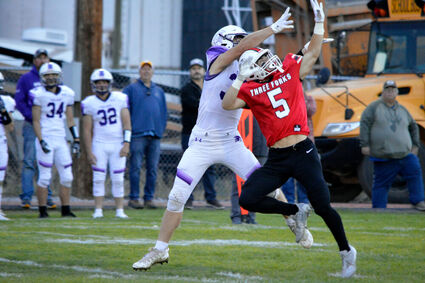 Reid Woodward goes up for the reception last Friday against Whitehall. Voice photo by Melissa Jenkins

The Three Forks High School football team will look to get out of the gates strong when they travel Friday for a conference matchup at Big Timber.

Following the game, Three Forks Head Coach Connor Sullivan said every team in the conference is good, and his squad needs to be ready to play four quarters.

"Unfortunately for us, we played a quarter and a half tonight. That is on me as a coach, and I have got to get them going and get them ready to play. We have to start games better, plain and simple," he said.

After scoring the only points in the first quarter to lead 7-0, the Trojans would score two more times in the second quarter.

Sullivan said his team was moving the ball well, they just stalled out and could not finish drives.

"We have to get better offensively and finish drives. Defensively, we need to clean some stuff up and get back to work this week and be ready to go," he said.

The Wolves scored twice in the second half on touchdown passes from junior Tallyn McCauley to sophomore Dylan Swenson. McCauley finished the night 19 of 37 passing for 205 yards with two touchdowns. Colten Hayder had a big night with nine receptions for 97 yards. Shane Williams had three receptions for 46 yards, and Reid Woodward had eight receptions for 33 yards.

Caleb Van Vleet had a big night on the ground with six rushes for 48 yards. Sawyer Anderson had 11 carries for 38 yards.

Looking towards Big Timber, Sullivan said his squad would get back to the drawing board and get ready for the undefeated Herders.