It was quite the week for the Three Forks High School Boys' Basketball team.

The Wolves snapped a three-game losing streak on Friday, January 20, with junior Shane Williams hitting a shot at the buzzer for a thrilling 64-63 win over then-fourth-ranked Columbus.

"That was a huge win Friday night, and to do it in the fashion we did with a buzzer-beater makes it that much more enjoyable. The fans got a great show, and it was a great game to be a part of. That should give the kids some confidence as a young team going forward," said Head Coach Terry Hauser. "I was and continue to be proud of the fight in our team. They never give up. We were down six with a little over two minutes left and overcame the deficit. The kids felt comfortable as that is part of Coach (Tyler) Palmer's defensive breakdown. We cover a lot of situational scenarios in practice, so the kids are ready for those moments."

Dylan Swenson and Hunter Feddes each had huge nights against Columbus, finishing with 19 points. Caleb Van Vleet finished with eight, Williams had seven, Carson Woodland ended his night with five, Colten Hayder added four, and Tallyn McCauley had one.

With the game at Big Timber tied at 16 at the half, the Wolves had a huge third quarter out-scoring the Herders 19-10 on their way to the 12-point victory. 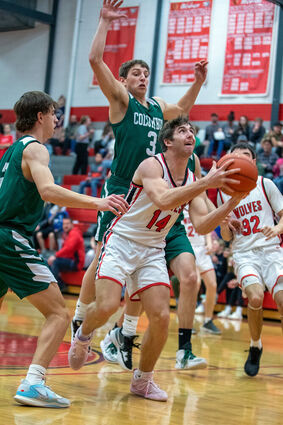 Shane Williams takes it to the basket last Friday against Columbus. Photo by Trisha Jones Photography

"Saturday was another amazing win for our boys. The last time we had a big win was when we beat Manhattan on their home court, and we came out the next night flat and didn't play well. It was awesome to see the kids respond and put two great nights together. Heading into the tournaments, we are going to need to be at our best every night. Needing to win three, some-times four games in a weekend is mentally and physically tough," Hauser said.

Three Forks will have two 5B Conference games this week with a home game Thursday, January 26, against Manhattan and a road game Friday at Boulder.