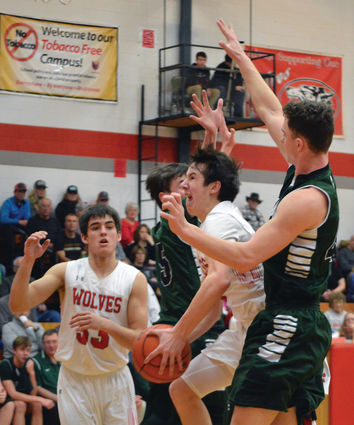 Three Forks junior Micaiah Hauser drives the lane Saturday against Columbus. Hauser was impressive last week in his first action of the season after returning from a knee injury he suffered during the football season. He scored 10 at Deer Lodge and six against Columbus.

The Three Forks High School boys basketball team will be riding a seven game win streak when they open postseason play Friday at the 5B District Tournament in Belgrade.

The Wolves (14-4, 8-2 5B) wrapped up the regular season in impressive fashion last week with a 60-43 road win Friday over fifth ranked Deer Lodge and a 72-35 senior night win Saturday against Columbus.

"We're playing good at the right time. I told them at the end of the season is when we've got to start coming together and playing good. I'm excited for the district tournament and to see who we are playing Friday and hopeful...