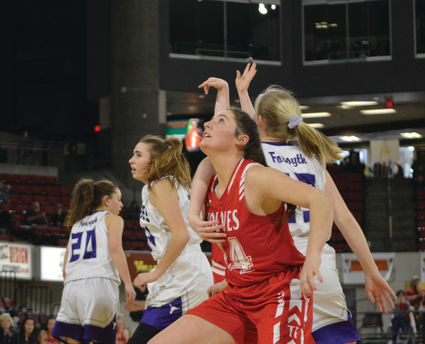 Senior Paeton Ohs boxes out against the Dogies.

A four-game win steak to start to the 2019 postseason came to an end Friday afternoon for the Three Forks High School girls basketball team.

After falling 53-43 to Forsyth in the semifinals of the Southern B Divisional Tournament, the Lady Wolves (11-12) will now need to win two consecutive games Saturday to advance to next week's state tournament in Belgrade. Three Forks will play against Townsend Saturday morning at 9 a.m. at Rocky Mountain College. The two teams are no strangers having already met three times this season. Townsend won the first two games in regular season before the Lady Wolves knocked them from the ranks of the undefeated with a 38-29 victory in the semifinals of the District 5B Tournament in February. The winner will move into the consolation championship with a berth at state on the line.

The loss Friday by Three Forks was the first time they have lost a postseason since the semifinals of the 2017 tournament, a streak of 13 games.

It was a slow start to the game offensively for the Lady Wolves who scored just two points in the first six minutes of the game. Trailing 7-2, Three Forks would come to life when after a free throw from Howey and Keaton Lynn put back. She tied the game with her free throw and on their next possession Olson gave the Lady Wolves their first lead of the game with a jumper just inside the three-point line. Then Forsyth would answer on their next possession and the game would go into the second half tied at 9. 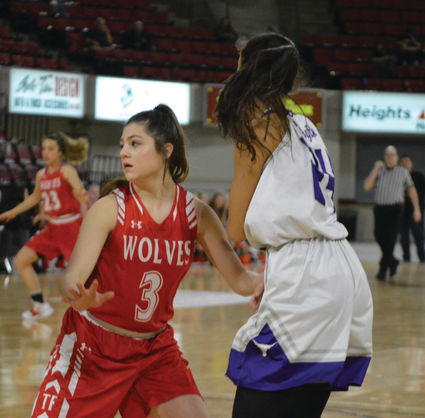 A three from Olson would give Three Forks back the lead on the first possession of the second quarter. The Lady Wolves would up the lead to 14-10 on a jumper from a Bloch an take a 17-10 lead after an old-fashioned three-point play by Olson. Following a Dogie basket, Three Forks would regain the seven-point lead on a layup from Howey. Forsyth would cut the lead to 21-18 with 2:30 minutes before Olson responded with a jumper to push the lead to five. The Dogies would cut the lead to two on a three pointer late in the quarter before an Olson layup extended the lead gave the lady Wolves a 25-21 lead. Forsyth sophomore Lindsey Hein was able to score in the closing seconds of half to cut the lead to 25-23 going into the break.

Hein would tie the game for Dogies on the first possession of the second half for Forsyth who would open the third with seven consecutive points to take a five-point lead before an Olson three cut the to 30-28. After a Dogie bucket, Kendall Lynn cut the lead back to two with consecutive free throws with 3:13 left in the quarter. After a Roxanne Keefer basket to extend the lead to four, Olson would once again cut the lead to two with a pair of free throws. A