Memorial to have new home at Veterans Park 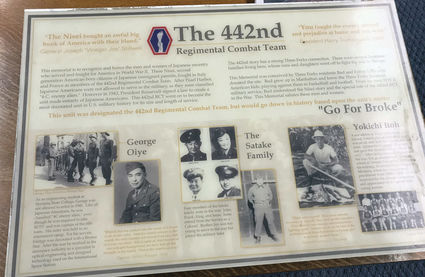 Pictured is part of a Japanese American Memorial that will soon have a new home at Veterans Park in Three Forks.

A memorial erected by the late Navy Veteran Bud Lilly to honor Japanese Americans who served in World War II will soon have a new home in Veteran's Park in Three Forks.

The memorial that tells the story 442nd Regimental Combat Team is in the process of being bronzed and according to Three Forks Mayor Sean Gifford, the city is planning a dedication at a to be determined date.

Gifford said Bud Lilly, who passed away in 2017, wanted to do something to honor not only all the Japanese who served but also for the multiple local families he knew.

Mahalo for the story about the late Bud Lilly and his memorial to honor Japanese Americans from the area who served in World War II. It should be noted that the 100th Infantry Battalion made up of men of Japanese descent from Hawaii already in the Army on December 7th was formed in June 1942 and landed in Italy in September 1943. It became known as the Purple Heart Battalion and paved the way for the 442nd RCT to join them in June 1944. http://encyclopedia.densho.org/100th%20Infantry%20Battalion