I have so many fond memories of my childhood spent with my Grandpa and Grandma Smith. The two were a huge part of my life and we spent many days attending the University of Wyoming football and basketball games and many fun-filled vacations to places like Jackson Hole and Salt Lake City.

There were numerous days spent at their house with countless hours spent in their backyard playing with my cousins. As many games as we would go to, there were always the ones we did not make and for those we had always had the "Voice of the Cowboys: Mr. David Walsh" and his trusted play-by-play sidekick and University Sports Information Director Kevin McKinney. The two are iconic in Wyoming and do the best job of any duo I've ever listened to. Listening to the two makes you feel that you are actually sitting in the stands and their catchphrases are known by all Cowboy fans.

When I was younger, we always listened to the games on a tiny portable radio that belonged to my grandpa. I always felt the radio outdated me by a couple of decades and yet it still sounded great. You could only get AM channels, but that didn't matter because all it was used for was the Wyoming games and an occasional Denver Broncos game on a Sunday. I think back so fondly of sitting in the front room of my grandparents' house and listening to the games.

On a few rare occasions, I was able to take the radio outside to listen to the "oldies" station and I felt pretty damn important being trusted with it. One time they went downtown for a few minutes and I opened the back of it up and was mesmerized by what was inside. I felt kind of dirty that I did this, so I did not do it again, I strictly used it for what it was intended.

Years would pass and they eventually upgraded to a radio with a cassette player and it was never the same. There was something about the way that old radio sounded that made it sound better. It's kind of one of those things like an old burger joint that has been using the same grill for years. The grill has become seasoned over the years and it just tastes better. The radio was the same it had been seasoned to sound amazing for Wyoming sports and an occasional "Herman and the Hermits" song.

Eventually, I would make my way into high school and eventually college and would still occasionally listen to a game with them, but the radio became a distant memory. I hadn't thought of it in years until recently I had a dream about the radio and knew I had to find one.

My grandparents both passed away and I have no idea what happened to their radio, so I knew the internet was the way to find one. The big problem was that I had no idea what brand it was or even anything close to a year. 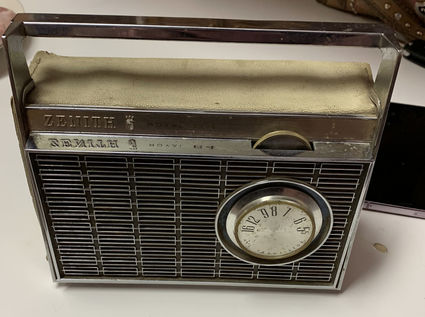 I kept coming up empty on my searches because believe me there were a lot of models of radios back in the day. One day I tried again, and I found it. I could not believe the picture I found of a model for sale. It was the exact one and it was for sale.

Within about three minutes I had purchased it and was so excited for its arrival from Iowa. When I opened it up it was exactly as I had remembered. I was so happy and for a giggle, I opened up the back and was still confused about how a radio worked.

I sent my cousin a picture and he agreed it was the same radio and we both decided that a great way of thinking would be to assume it was the EXACT radio that had someone ended up in the Midwest.

It works just fine, but I'm going to be patient about its first real use. I'm going to visit Wyoming and listen to a game with Walsh and McKinney. That will take me back to a place and time I will never forget.