This Thursday will be a significant date as the City of Thursday celebrates its 112th birthday.

According to former Mayor and current Council member Gene Townsend, the date of September 17, 1908, is looked at as the official date the town was established.

In the history section of the City of Three Forks website, it is reported that Main Street was lined with lot stakes and just three tent businesses: Pioneer Mercantile, a restaurant, and the Three Forks Herald Newspaper office, and approximately 700 to 1,000 people attended the sale of 250 lots ranging from $100 to $1,000 each, one even selling for $1,250.

While things have drastically changed over the years, one constant in the City has been the governing body.

The first record of a Council meeting is on February 21, 1910, when they appointed Martin Vetelson as both clerk and town attorney and authorized him to order all the supplies necessary for the annual election which was decided to take place the first Monday of April. The governing body also authorized Vetelson to order a set of the State's statutes. 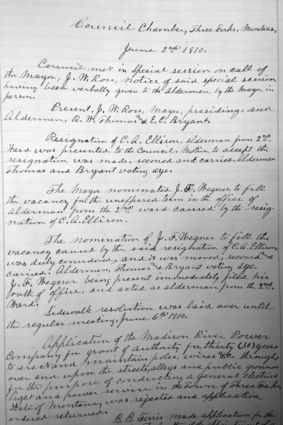 At their March 7, 1910 meeting, the Council passed Ordinance 1 that consolidated the offices of the Clerk and Tax Treasurer, Town Marshall, and Street Commissioner and naming their salaries. The Council also discussed drafting a resolution that would limit the number of saloons in town to six and commanding saloon owners to keep them closed after midnight. The cost for a yearly liquor license was not decided, but options were $200, $225, and $260.

Very much like legal requirements in 2020, council members also voted to approve publishing ordinances passed in the regular weekly issues of the Three Forks Herald.

At their March 14, 1910 meeting, the Council announced they had no money in their treasury and drafted a resolution for a tax of mills or one percent to be levied upon all taxable property in Three Forks.

The minutes for the June 3, 1910 meeting were handwritten and show an application from Madison River Power for a grant of authority for 30 years in the city.