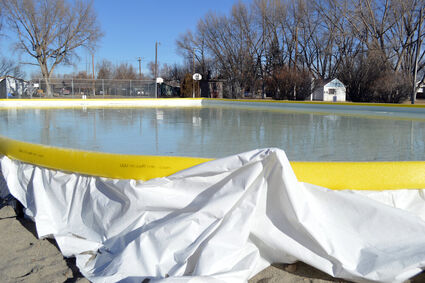 Pictured is the new portable ice rink at Stevenson Park. Unfortunately, vandalism was reported at the park less than 24 hours after it was filled. As of Tuesday, the rink was open for kids to skate. Voice photo by Melissa Jenkins

While there was some great news last week in Three Forks with the filling of the new ice rink, some vandals soured the party with vandalism less than 24 hours since water was added to the portable facility at Stevenson Park.

According to City officials, just the liner for the project is $2,000 and more damage to it will cause the water to seep right back to the ground and will make the rink null and void.

The rink that is 50x100 feet with two-feet high boards was filled Tuesday, December 22 with help from the Three Forks Volunteer Fire Department. The vandalism was reported by the city o...