2021 Legislature convenes in a crowded Capitol

HELENA - Members of the House and Senate kicked off the 2021 Legislature in person at the state Capitol on Monday, formally convening and electing leadership for what may be a turbulent 90-day session during the COVID-19 pandemic.

Lawmakers took their oaths of office on the House and Senate floors, observed by crowded galleries of family members, friends and members of the public. Republicans in the Senate and House partially complied with mask guidelines that have been stressed by public health officials. Democrats and legislative staffers appeared almost universally to wear face coverings, but did not regularly maintain physical distance during proceedings.

The majority-Republican Senate elected Sen. Mark Blasdel of Kalispell to serve as Senate president. Representative Wylie Galt, R-Martinsdale, was unanimously picked as Speaker of the House, regardless of rumblings about a challenge for that position by the party caucus' more conservative faction. Both leaders pledged to bring lawmakers together to pass critical legislation during a chaotic time for the state.

"I am hopeful that we will continue a tradition of respect and civility. You have my promise that I will lead the House with these values in mind," Galt said in an address after his election. "It is my priority to ensure a safe and healthy working environment to all in the Capitol this session."

Sen. Jill Cohenour, of East Helena, and Rep. Kim Abbott, of Helena, will serve as minority leaders for the Democratic caucus. In her remarks to the House, Abbott pledged that Democrats will spend this session pursuing strong health care and education policies and keeping Republicans in check as the GOP begins a period of unified control across state government for the first time in nearly two decades.

"It's an incredible responsibility to govern during very uncertain times," Abbott said. "And our job is to hold you guys accountable for that responsibility. We'll do it each and every day."

After months of passionate deliberations about whether to follow the advice of local public health officials, lawmakers have opted to conduct a hybrid session accommodating both in-person and remote participation, with masks and physically distancing optional. On Monday, some Republicans who did opt to wear masks during the floor proceedings later removed them to speak to colleagues. Many public attendees, having previously attended an anti-mask rally outside of the Capitol, flooded into the galleries with no masks or physical distancing.

"Montana is a diverse state with a lot of differing views," Blasdel said during a Monday afternoon press conference with House and Senate Republican leaders. "We're letting our members make that individual decision themselves."

Lawmakers will have access to testing if they begin to exhibit COVID-19 symptoms during the session, Galt said, adding that legislators are working with Lewis and Clark County health officials on how to conduct contact tracing with legislators hailing from all parts of the state.

The top priority for Republicans, Galt said, is responding to the pandemic's economic impacts and helping businesses recover, which they suggested could be accomplished through a combination of tax relief and regulation reductions - both long-standing Republican priorities that square with the goals outlined by Gov. Greg Gianforte in his inauguration speech Monday morning.

"There's a lot of Montanans hurting," he said.

Senate Minority Leader Jill Cohenour said her caucus recognizes the difficult position Democrats are in, but said they hope to work with Republicans to quickly recover from the pandemic and to prevent cuts to health care, education and public services.

"While we disagree on plenty, we hope that we can agree that we don't want to be the ones that lengthen the pandemic for Montana's economy," she said during a speech on the Senate floor. "We have a responsibility to those that sent us here. We can face the challenges ahead by working for Montana values and providing the voice for Montanans in our work this session." 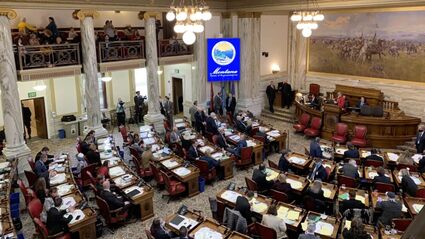 Legislators convene on the House floor as the 67th Montana Legislature kicked off on Jan. 4, 2021. Credit: Mara Silvers

GOP lawmakers also said they intend to pursue legislation that supports "consumer-driven" health care options as opposed to government programs, expands educational options for students and families, and protects access to public lands. In a flier passed out to members of the media before the press conference, Republicans also prioritized promotion of gun rights and restrictions on abortion.

"Our constituents sent us to Helena with a conservative mandate," she said. "With a unified conservative government, the leadership of the House and Senate looks forward to working with Governor Gianforte to accomplish these priorities in the next 90 days."