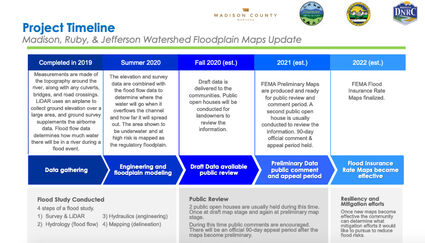 A collaborative effort launched in 2016 between government agencies and local government is currently in the process of updating the Flood Maps for the Madison-Ruby-Jefferson River Watersheds.

The update is for floodplain maps for portions of the Madison, Ruby, Jefferson, Beaverhead and South Boulder Rivers, and Mill and Indian Creeks. The new maps will provide the latest, most accurate flood risk data, and will eventually result in updated FEMA floodplain maps.

At the open house, DNRC Outreach Specialist Nadene Wadsworth discussed both the process and history of updating the map.

She stated prior maps and studies conducted starting in 1975 and the latest which was in 2011, that is the current FEMA map for the City. When discussing the current updates, Wadsworth said not having accurate and current information makes it hard to regulate and help growth in communities. She added there are several outdated maps and students in the watersheds and people need an accurate map, and these should accurately reflect flooding risks. According to the DNRC, new maps could have effects on some property owners in the mapped 100-year floodplains.

Wadsworth said as of right now they are at the stage where they are gathering information and modeling. She said at the draft data stage, they will start to have an idea of what will be changing, but these maps do not replace the current maps, but they want to share their information as soon as possible.

Once the information from the study is given to FEMA, Wadsworth preliminary maps will be created, there will be more public meetings, and finally a formal appeal and comment period.