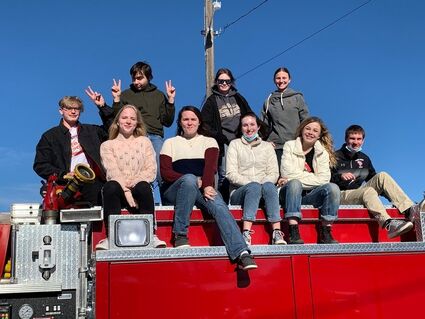 The Speech and Drama team competed at the Class B/C State Tournament this weekend hosted by Huntley Project digitally, spanning the course of Thursday, Friday and Saturday. The Speech team won the Class B state title for the first time in the school's history, while the Drama team placed as Class B state runner-up, making this only the fourth time in the school's history that both the Speech and Drama teams placed in the top two at the state competition. Alexis Welch won an individual state title in extemporaneous speaking, making her the only Three Forks Speech & Drama student in the school's history to win two state titles. Placing as individual runners-up in their competitions were Ayden Israel, Ravyn Lewis, Amber Horton, Lauren Welch, Des Nienhuis, and Zoe Pyfer. Also placing in the top four of their individual events were Sara Kopp, Caden Freeborn, Ally Kamps, Saryna Smith, Lauren Stone, Falisha Dale, and Josh Williams.

The goal from the start of the year was for both the Speech and Drama teams to place in the top three at the state competition, which is obviously a goal that these students achieved. That's a goal that they achieved in the face of competing this season digitally and all of the other changes that occurred. And on top of all that, for the speech team to win that title for the first time in the school's history and the drama team to place at runner-up with only eight competitors, these students should be extremely proud.

The state competition was marked by the senior leadership of Ayden Israel, Mikey Olsen, Alexis Welch, Ally Kamps, and Molly Collins on the speech side. Each of those students fought through every round, led the younger students, and put themselves in the best position that they could. Alexis completed a truly successful season in the way that she had hoped. Ayden Israel in Lincoln-Douglas Debate truly stood out by winning round-after-round early, then winning quarter-finals, then winning semi-finals, and then only losing the final round by one ballot. Then with the level of competition being high, the team placing was much closer than in the regular season, so the placing of Sara Kopp, Saryna Smith, AJ Boyd, Caden Freeborn, and Grace Donnelly completed the win.

The drama team had improved steadily throughout the entire season, with every member of the 8 student team contributing. Again, on Saturday the senior/freshman duo of Ravyn & Amber showed leadership and success. The two classical teams placed high and made the runner-up title happen. And then, a student who has worked-and-worked all season had his most successful tournament of the year: Zack Olson. The drama team only beat the 3rd place team by two points, so without Zack's contribution, that title wouldn't have happened. Zack's work throughout the whole season in many ways defines this team, so it is fitting that he helped to make that title happen.

It should be clear that Saturday's success was a team effort, and every single member of the 41 member team made that success happen. Much can be made of all the "firsts" that were listed in the initial paragraph, but the reality is that every student made it happen, whether they placed first over-all, or placed lower than they hoped. The toughness, work ethic, and talent of each student is just as powerful as all those "firsts."