The Three Forks High School boys and girls basketball teams will both look to keep their seasons alive Friday with elimination games at the 5B District Tournament.

In action Thursday night, the fourth-seeded boys' team fell 59-35 at top-seeded Manhattan. They will be on the road Friday at third-seeded Jefferson. The winner will advance for a shot at third place and a spot at next week's Southern B Divisional Tournament in Billings.

Host Manhattan stormed out of the gates early, taking a 12-0 lead before Three Forks scored their first points of the game on a Jacob Buchignani free throw with 3:35 left in the first quarter. The Tigers extended their lead to 23-5 at the end of the first quarter and led 36-10 at halftime.

Head Coach Terry Hauser said his team came out and played kind of soft and scared and feared the moment instead of being fearless.

Three Forks was led in scoring by Shane Williams with 10 points. Owen Long and Austin Allen each added eight points. Buchignani and Devon Potts each had three points, Caleb Van Vleet added two, and Walker Page finished with one point. 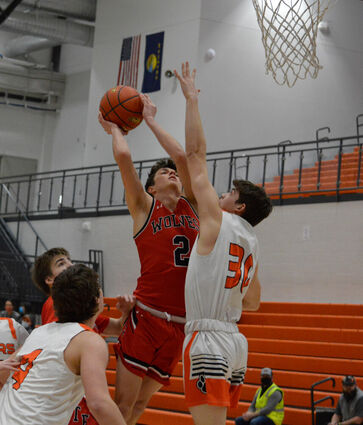 Looking towards the game in Boulder, Hauser said the team's goal is to advance to Divisionals.

"We've got to wipe this game out of our heads and get ready for Boulder. I told them I don't care if we lost by 30 or 2. It's time to move on. We've got a game to play tomorrow," he said.

Three Forks trailed 14-5 at the end of the first and 28-13 at the half. The high-powered Herders outscored the Wolves 21-4 in the third to take a 49-17 lead into the final quarter.

Editor's Note: Please look for home coverage of the Three Forks girls team tomorrow and updates from the boys' game at http://www.threeforksvoice.com.