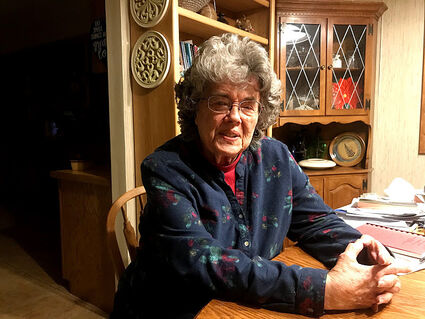 Editor's Note: These are the first two articles in a series about how local residents made it "Home to Three Forks".

"Only 4 boys had cars and Frank Kemmerer owned one of them, a "41 Chevy.  The boys planned an outing to Sandpoint, Idaho and he needed a date."

Kerin and Frank were married and Frank served in the Navy, stationed in San Diego.

"We had a hard time raising a family on $70 a month so we came back to Montana for Frank to attend school at MSU.  He and a Navy buddy ran the M&W Automotive repair shop in Bozeman.  When the shop in Three Forks came up for sale Frank bought it.  The rumble strips on the highway got too much use from his commute so we built a house in town."

Their children were all grown but they found plenty of activities to keep them busy:  Garden club, the men's coffee club, church, quilting groups, and more.  After Frank died of cancer, a gardening club friend, Orville McCarver started calling. They married and he moved to Kerin's home in Three Forks.

"He became a member of the mens' coffee club too," Kerin laughs, "and tried to teach me more gardening skills."

Orville died of a heart attack some years later and Karin had a couple of very nice boyfriends over the remaining years.

"I love the people in the community of Three Forks! I am getting older and will probably have to sell the house Frank built soon but I'll take my quilting board and memories with me."