Wolves wrap up season at Divisionals 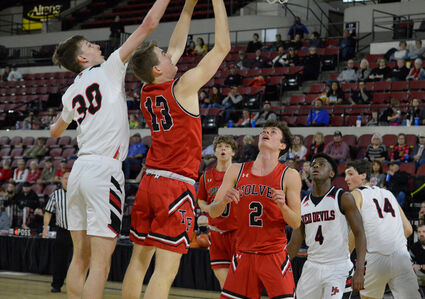 Three Forks junior Walker Page goes up strong in the first half against Huntley Project. Voice photo by Melissa Jenkins.

A furious second-half rally by the Wolves team fell just short in a 65-59 loss to the top seed from 4B Huntley Project on March 3, and the Wolves were eliminated with a 52-28 loss March 5 to conference foe Townsend.

The Wolves trailed 44-24 in the third quarter and 52-38 in the fourth before storming back into the game and pulling as close as 56-53 with two minutes left after consecutive three-pointers by juniors Owen Long and Austin Allen.