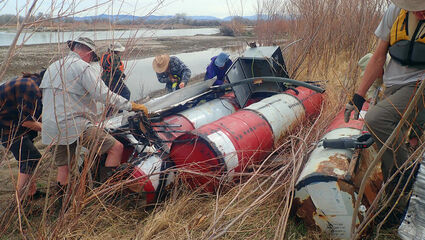 Members of the Jefferson River Chapter of the Lewis and Clark Trail Heritage Foundation and students from Green University prepare to remove the "Jefferson River Contraption." Courtesy photo

A total of sixteen paddlers canoed and kayaked from Drouillard Fishing Access Site west of Three Forks, downstream to the Contraption, then dismantled the wreck with battery-powered Sawzalls, a grinder, hacksaws, pry bar and hammer. The dismantled craft was hauled out in canoes, with some of the barrels floated behind the canoes.

The junk was hauled to Shoshone Landing, a campsite on the Jefferson River Canoe Trail by Old Town Bridge purchased by the Chapter for the public. From there it was loaded onto a pickup truck and recycled as scrap metal. The group retrieved three-fourths of the wreck on Saturday, with some participants returning Sunday to haul out the rest.

The "contraption" gets hauled in the Jefferson River.

The event was also the maiden voyage for Jefferson River Chapter president Tom Elpel's newest dugout canoe. Elpel and Green University students carved the 20-foot canoe over the winter from a 175-year-old cottonwood that fell at Shoshone Landing in 2019.

Elpel previously carved a dugout canoe under the tutelage of Churchill Clark, the great-great-great-great grandson of Captain William Clark of the Lewis and Clark Expedition. Elpel then led a five-man expedition down the Missouri River from Three Forks to St. Louis in 2019, as told in the award-winning book, Five Months on the Missouri River: Paddling a Dugout Canoe.

Elpel and his Green University students plan to do a six-week, 540-mile expedition down the Yellowstone River later this summer.