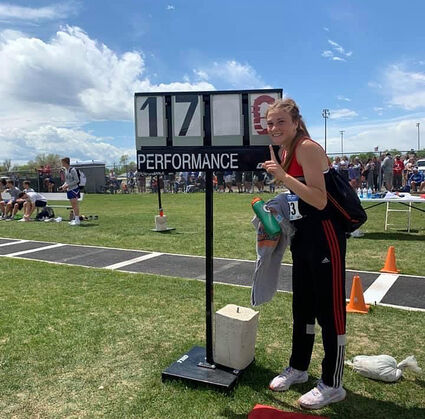 Murphy finished in first in the long jump at last week's Class B State Meet in Laurel with a winning mark of 17 feet and .25 inches.

"She has worked her tail off in season and offseason to be a champion," she said.

One of the best all-around track athletes in the state, Murphy also finished fourth in the 300 hurdles, sixth in the 200 meters, and just missed out on placing in four events after finishing seventh in the triple jump.

"Jasmyn had an incredible year, but I know she plans on an even bigger year next season," Welter said.

Junior Owen Long once again shined in the long jump, finishing in fifth place with a mark of six feet.

In other action from state, Welter highlighted Brielle Davis for hitting another PR in the javelin and narrowly missing the finals with an 11th place finish. Welter added Garrett Golding also set a PR in the 800, knocking off 4 seconds off his previous best. Golding finished ninth overall.

Addie Van Vleet was 16th in the long jump, Morgan Carr was 19th in the discus, Beau Johnston finished 18th in the 3200, and Anthony Deriana was 17th in the javelin.